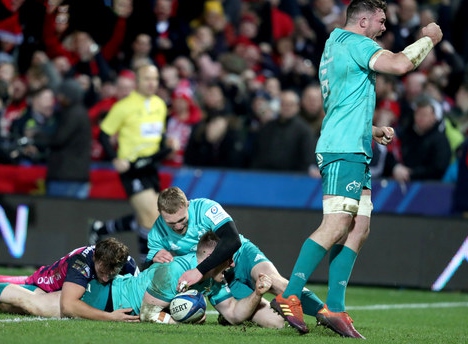 When the draw was made for the Pool stages of the Champions Cup way back in July, Gloucester away was certainly one circled in the diary. We have a storied history with Gloucester and have enjoyed many red letter days in Kingsholm.

When the draw was made for the Pool stages of the Champions Cup way back in July, Gloucester away was certainly one circled in the diary. We have a storied history with Gloucester and have enjoyed many red letter days in Kingsholm.

Arriving to an airport bristling with red and seeing people boarding flights for Bristol, London and Birmingham, all with the one destination in mind creates a great energy and does lend itself to the title “Red Army” as we deploy by all forms of transport.

Our transfer from the airport was delayed so five of us altered course for the studio of BBC Radio Gloucester – The Afternoon show with Stephen Kitchen. Stephen expressed serious doubt that 2500 Munster fans traveled to Gloucester and he was right; at least 3000 were present.

A hop to the hotel to drop the bags off followed after and we then wandered towards some of our MRSC meeting points which give an indication of the travelling support as we struggled to get in to any of them.

After sampling some of the pre-game atmosphere, we went for a quick visit to the Cathedral (used in Harry Potter incidentally and worth a visit) for the pre match pray to the divine power for the result and off towards Kingsholm we went.

The Shed is such a historical place to watch a match mirroring the terraces of Thomond Park. Two hours to kick off, the Shed was half full already and we took turns as the “Fields” was followed by the Gloucester roar to form the vocal warm up for the upcoming 80 minutes.

The sardine effect soon took place in the shed with the stewards struggling to maintain the access and egress steps as Supporters were crammed tighter together which led to humorous comparisons with the attempt to create a border in these harsh Brexit times   – you could see the Gloucester season ticket holders trying to face the unimaginable challenge of having their spot taken for the first time in years which did lead to one or two athletic conversations (I heard one Cork man say – we have held the shed, it bodes well for the match)

Absolutely awesome Munster crowd at Kingsholm. A pleasure to be a part of it. #SUAF

Simply stunning JC.. capacity to scan on the run and execute belongs to very few..#Special

The atmosphere in the last 20 minutes was truly memorable and we can only hope the Team could tell what this meant to us.

We headed across the road to Teagues bar post the victory lap for the post-match punditry / party and the late night return to the hotel for a few hours of R&R before heading back to Bristol.

Heading towards the departure gate we saw Sam Warburton walking towards us – he stopped as we acknowledged such a great player and he said “You lot are contenders” to which we all smiled and said “We are indeed Sam, we are indeed”.