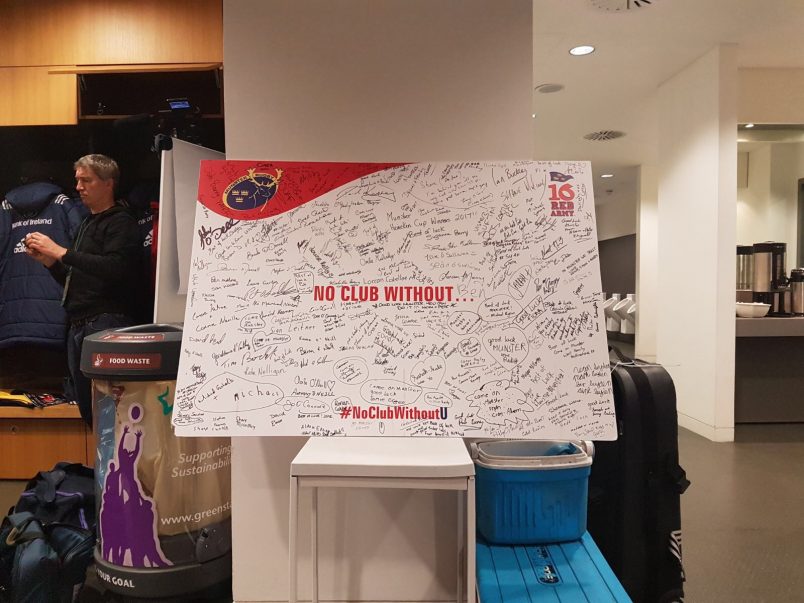 With plaudits coming in from players, journalists and more who were simply astounded by the sheer level of support and atmosphere created by Munster Supporters at the Champions Cup Semi Final we would like to take this opportunity to take a look back and appreciate our members and fans who made the day so special, despite the result.

With plaudits coming in from players, journalists and more who were simply astounded by the sheer level of support and atmosphere created by Munster Supporters at the Champions Cup Semi Final we would like to take this opportunity to take a look back and appreciate our members and fans who made the day so special, despite the result.

The support this season has been outstanding but the #RedWave campaign surrounding the Champions Cup Semi-Final deserves a special mention. Below are some of the stand out moments from the past few weeks.

We put a call out to members to send in their messages of support which we made into a booklet which along with our #NoClubWithoutU board, signed by supporters at the Munster v Ulster game, made their way to Dublin and took pride of place in the Munster Rugby dressing room for the players to read pre-game.

Not only this but supporters snapped up thousands of Munster car flags from Irish Independent Park, Thomond Park and Bank of Ireland branches as well as decorating their homes and work places in the red of Munster. MRSC meeting points were organised (our thanks to Wanderers FC and MRSC Dublin venue the River Bar) and our free MRSC bus service from each of the counties proved hugely popular as everyone rowed in behind the #RedWave. A special mention also has to go to members of the MRSC, MRSC Committee, MRSC Dublin branch and Munster Rugby staff who covered the lower tier of the Aviva with almost 10,000 flags on the eve of the game. This was a huge addition to the match experience on the day.

On Match Day despite the terrible traffic, our supporters turned up in their thousands to create the second biggest crowd ever recorded at a Champions Cup Semi Final as 53,100 people turned the Aviva red. Thank you to those who marched with the MRSC from our meeting point at Wanderers FC and each one of you who created a sea of noise at the stadium.

Following Saracens’ 26-10 victory, a huge contingent of the supporters stayed to cheer the Munster team as they did a lap of the field. The Fields of Athenry rang around the pitch as our way of saying thank you to the players for such an incredible journey so far this season and for never giving up on the pitch. Players such as Owen Farrell and Niall Scannell all commented on what an experience it had been to play in front of that roaring sea of red. A collection of messages and tweets can be seen below.

Having spent the weekend in Dublin for the Champions Cup Semi Final – Guardian journalist Robert Kitson was so inspired by the Munster Supporters that he wrote that Ireland was the best place to host the 2023 Rugby World Cup.

‘From a seat in the Aviva Stadium over the weekend, with the Fields of Athenry being belted out at full volume, the answer felt almost too obvious…. What would capture people’s hearts and minds most in 2023: a Rugby World Cup in Ireland, France or South Africa? The answer, by a neck, is Ireland.’

Though our European journey has ended this season, there is still everything to play for in the Guinness PRO12 as we battle it out with Scarlets for a vital home Semi-Final spot.  For the season so far, the season remaining and for the season ahead thank you, once again, for your unwavering support.

No Club Without… Ger Harrington