No Club Without… Ger Harrington 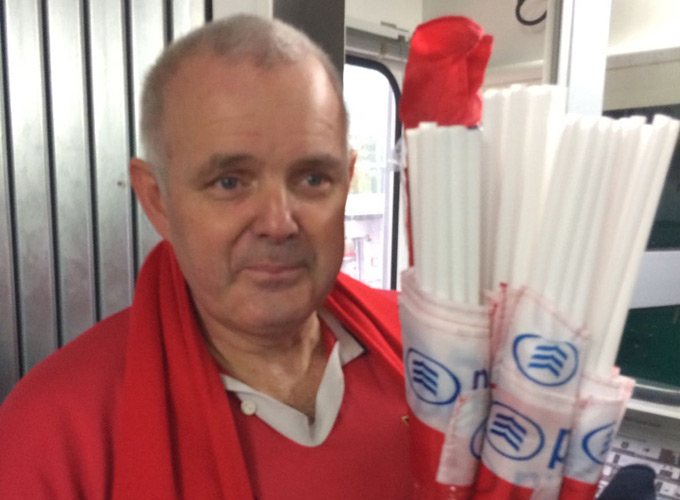 As part of our #NoClubWithoutU campaign which has seen thousands of new and renewing members for the upcoming Season 2017/18, we profile just some of the supporters and volunteers who have made an invaluable contribution to Munster throughout the seasons, beginning with Guard of Honour coordinator Ger Harrington.

As part of our #NoClubWithoutU campaign which has seen thousands of new and renewing members for the upcoming Season 2017/18, we profile just some of the supporters and volunteers who have made an invaluable contribution to Munster throughout the seasons, beginning with Guard of Honour coordinator Ger Harrington.

As witnessed again at the Aviva Stadium last Saturday, the #RedWave of support for Munster remains a much heralded and iconic site in world rugby – win, lose or draw. In the words of CJ Stander in the aftermath of the loss to Saracens, “What stands out to me, the Munster Rugby supporters! Without a doubt the best rugby supporters in the world #RedWave.”

And while the over 50,000 fans in attendance last weekend, coupled with the hundreds of thousands more who have worn red with pride over the seasons, can rightly claim their part in these unforgettable scenes, one man in particular is worthy of note.

Bearing the province’s coat of arms and chaperoning the team as they enter the field of battle for every game is a Guard of Honour. There you will find MRSC member Ger Harrington, who, for the best part of fifteen years has not only organised the Guard of Honour, but also facilitated the distribution of tens of thousands of Munster flags as the #RedWave flooded not just Thomond Park and Irish Independent Park, but stadia and cities extending from the Stade Velodrome in Marseille to, perhaps most fondly, the Millennium Stadium in Cardiff.

A labour of love for Ger, it’s one that keeps him busy from beginning to end of each season.

“We start before the season even commences and then at various stages throughout the season also, looking for supporters to take part in each Guard of Honour. MRSC members are emailed and it’s also in the MRSC notes of the programme asking them if they want to take part, and there’s never a shortage of requests! From first time trips to Thomond Park, to birthdays, to anniversaries, we do our best to collate games in accordance with people’s requests.

“And then there’s the distribution of flags where the same team of up to twelve volunteers meet up to distribute flags on matchday. They are excellent, they know exactly the areas they need to cover and without them it would be an impossible task. Take the ’06 and ’08 finals in Cardiff for example where 12,000 flags were distributed to fans as they entered the Millennium Stadium.

“Another day that will live long in the memory was when Thomond Park reopened and Munster took on the All Blacks. On the pitch alone we had over 25 volunteers drawn from all aspects of Munster Rugby and the MRSC who were there not just on the night, but for rehearsals in the weeks previous also. Normally I never carry a flag myself, but I had the honour on that night and it was something I’ll never forget.”

When asked ‘what is so special about supporting Munster’, the Cork native added, “One word, family. The people giving out the flags on the way in, they know the faces of the supporters and the supporters know them. Be it a home or away, in the stands or in an airport, you always meet the same faces.

“People have their own places in the terraces, they queue for hours to get their same spot. The craic, the banter, if it’s your first game the crowd will help you along and tell you what’s happening. Plus there’s the quick witted remarks for visiting players and refs, all meant in good sport of course!

Munster Rugby; no club without Ger Harrington, #NoClubWithoutU. 2017/18 Season Tickets and MRSC memberships are now on sale, click here for full details and to purchase.