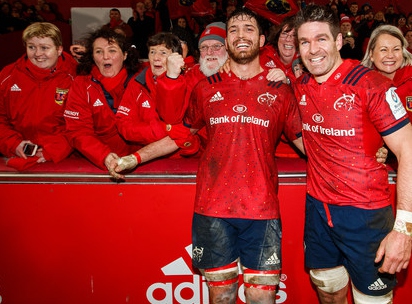 We always feel that jolt of excitement when the great citadel of Thomond Park peeks into view on a match day but that jolt becomes a surge when the cold bite of January gives us a Pool decider with a Premiership table topper at half five of a Saturday.

We always feel that jolt of excitement when the great citadel of Thomond Park peeks into view on a match day but that jolt becomes a surge when the cold bite of January gives us a Pool decider with a Premiership table topper at half five of a Saturday.

Exeter arrived knowing that the rarest of scalps – that of a win away in Limerick – would seal qualification and while we had the cushion of a bonus point loss being enough, that was never a topic in any pre game discussion.

We had an early start in the MRSC bar as we laid on some food for the Exeter tribe – a return gesture for their warm hospitality in Sandy Park back in October. It’s safe to say we have formed a strong bond with our peers from Exeter. Theirs is a club build in our image, community based, unwavering in their support and loud on the terraces.

The game was a ferocious contest from first whistle to last. Exeter’s punishing possession game has seen them lead the Premiership this season in try scoring with fifty but bar one early five metre maul, the Munster defence kept them out. Holding this side to seventeen total points over two games is a fantastic achievement.

Every player in red put their body on the line with captain Peter O’Mahony shrugging off the mere notion of a popped rib to play the full eighty but two second rows in particular deserve praise; Billy Holland came off the bench to steal a lineout at Gloucester and to lay on a try for Keith Earls and once again here, he made a crucial lineout steal five metres out with the Chiefs sniffing blood.

What more can be said about the immovable object that is Tadhg Beirne? Time and time again there was the arched figure of a player in red pilfering or slowing down Chiefs ball and time and time again it was the familiar blue scrumcap of Beirne who would emerge. Beirne finishes the pool stages with thirteen turnovers. He led the tournament in turnovers last year with eighteen and for context no player has more than thirteen turnovers in the last three Champions Cups (H/T to Cian Tracey for the stat)

Joey Carbery stepped up late in the game to knock over the winning penalty making it twenty from twenty since the Castres game. We’ve seen the spectacular side to his game in the last few weeks and we’ve seen the mental toughness from the tee.

We said our goodbyes to our friends from the Chiefs safe in the knowledge we had forged another strong bond with a terrific group. As he left, the leader of their group Richard turn and gave us one last tomahawk chop.