The MRSC Choir: A Season in Review 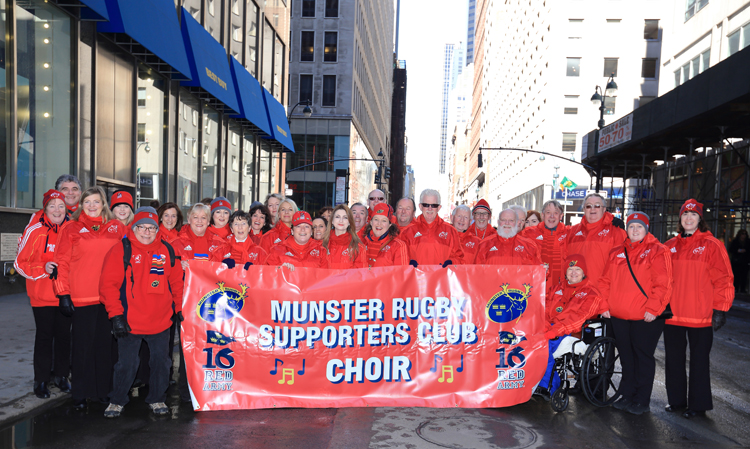 Of all sports, singing is without doubt intrinsically linked to rugby and we are very proud to have our own Munster Rugby Supporters Club Choir. We hear from the Choir here with regards to their activities over the past season…

Of all sports, singing is without doubt intrinsically linked to rugby and we are very proud to have our own Munster Rugby Supporters Club Choir. We hear from the Choir here with regards to their activities over the past season…

The current MRSC Choir members come from all parts of Munster, and travel as far away from Cranny (West Clare) to Bandon in order to rehearse every Tuesday evening in the Charleville Park Hotel. Our members also give their time; rain, hail or shine, to be in Thomond Park or Irish Independent Park 3 hours before kick-off for a sound check and rehearsal before every match.

As a Choir we are proud to be part of Munster Rugby pre-match entertainment, standing on the hallowed turf on match day to entertain the crowd, leading the fans in singing and, most importantly, getting behind our team and supporting Munster Rugby.

In the 2016/17 season, the MRSC Choir enjoyed a varied calendar of events, from charity performances for Guide Dogs for the Blind and Limerick's Pay it Forward campaign, an afternoon of song in King John's Castle for the Richard Harris International Film Festival and, of course, singing in Thomond Park and Irish Independent Park before home matches, which is always a huge honour.

Undoubtedly the Choir’s most emotional performance was singing at the Glasgow home match the day after Anthony Foley was laid to rest. The match was one of those sporting occasions that transcends a game and it made a bold statement about who we are as Munster Rugby – a team indelibly bound to the supporters and vice versa. We are proud to be a small part of that.

In a first for the MRSC Choir, we travelled to New York in March to take part in the St Patrick's Day celebrations there. The trip was the culmination of 2 years of planning and networking and, although the cost of flights and accommodation was prohibitive for many, 28 members managed to make the 5 day trip.

Before setting out we were invited to a civic reception hosted by the Mayor of Limerick, Kieran O'Hanlon.
On Friday 17th March, the MRSC Choir joined the MRSC USA Branch to march up Fifth Avenue in the oldest St Patrick's Day parade in the world. The atmosphere was incredible and it was amazing how many Munster Rugby supporters were in the crowd. As representatives of the MRSC, we were proud to be musical and personal ambassadors for everything Munster and Irish.

During our stay in New York we were invited to perform at many venues, including the Irish Consulate, where we sang for the Consul General Barbara Jones, as well as the Minister for the Diaspora and various mayors and dignitaries. The trip culminated in a packed out concert in the beautifully situated Pier A, Harbour House. You can view a selection of the photos from the trip to NYC on lindafoto.ie here.

Next season heralds our 10th year and over the ensuing months we will be carrying out a full review on how best to harness the dedication and passion our members have for Munster Rugby. With a new Musical Director in place, the MRSC Choir will continue to be committed to producing a diverse repertoire of music at the highest level of performance in pursuit of its ethos of bringing the love of rugby and singing together in a fun way.

Munster Rugby supporters are famous throughout Europe for their respect for opposing teams, good humour, knowledge of rugby and singing. As well as reaching out to each county in the province, we are hoping to forge stronger links with other rugby club choirs, both at home and abroad. We are looking to the future with confidence and excitement and, to the best of our ability, will endeavour to support our team in their journey towards excellence.

The Munster Rugby Supporters Club would like to take this opportunity to thank the MRSC Choir for their hard work and commitment over the past season. Should you wish to contact the choir you can do so by emailing mrscchoir@munsterrugby.ie