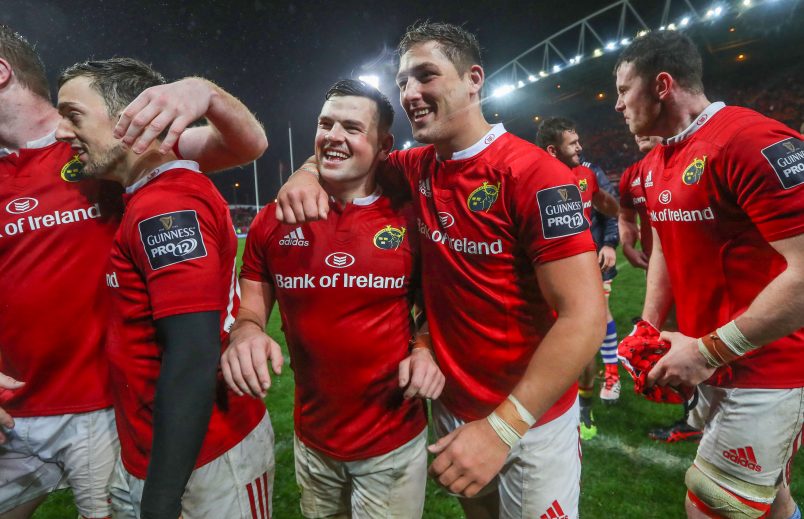 21-year-old fullback/winger Stephen Fitzgerald made his PRO12 debut in September 2015 scoring a try against Ospreys at the Liberty Stadium. With two senior caps, the Shannon and former Ireland U20s player has made 13 appearances for Munster A in the British and Irish Cup, playing his part in the title winning campaign this season. In securing further game time the Limerick-native joined Bond University in Australia for the summer months.

Centre Dan Goggin’s progression accelerated during his final season of the academy after the 22-year-old made his PRO12 debut starting against Scarlets at the Liberty Stadium last September. Going on to make 14 appearances for the season, including seven starts, the former Ireland U20s and Ireland 7s player was nominated for Academy Player of the Year. On the B&I Cup front the Young Munster man has played on 16 occasions including five 80-minute appearances during this season’s successful campaign.

Fellow third year player Brian Scott can play on both sides of the scrum as a tight and loose-head prop. The 24-year-old made his PRO12 debut against Scarlets in the opening round of the tournament and went on to make his Champions Cup debut against Glasgow in October. The former Ireland U20s player has 12 Munster A caps, and the Dolphin man started every game in this season’s B&I Cup winning series. Scott’s impressive form led to a nomination for Academy Player of the Year this season.

Although his progress has been hampered by a number of injuries 20-year-old Bill Johnston has shown his potential and talent when previously lining out for the Ireland U20s, Munster A and his club side Garryowen FC. This season the young outhalf managed a Guinness PRO12 debut when coming on as replacement against Zebre in Parma in March. In his 5 B&I Cup appearances to-date the Clonmel native has kicked 42 points.

In just his second year with the academy, Conor Oliver stood out as one to watch for the future and was deservedly named the Academy Player of the Year at the start of May. Making his PRO12 debut against Glasgow Warriors in February 2016, just over a year later the back row would win a man-of-the-match accolade against the same opposition in a season where he made 15 appearances, scoring 4 tries. The 21-year-old also played an integral role in Munster A claiming their second B&I Cup title, crossing for a brace of tries in the semi-final win over Ealing Trailfinders at CIT.

The second year trio of Cork Con’s Ned Hodson, Young Munster’s Ben Kilkenny and Garryowen’s Steven McMahon have also completed their time with the programme. McMahon most recently joined O’Shea when lining out for Ireland 7s at the Amsterdam 7s.

The first year intake will be confirmed in the coming weeks.

End of Season Thank You!