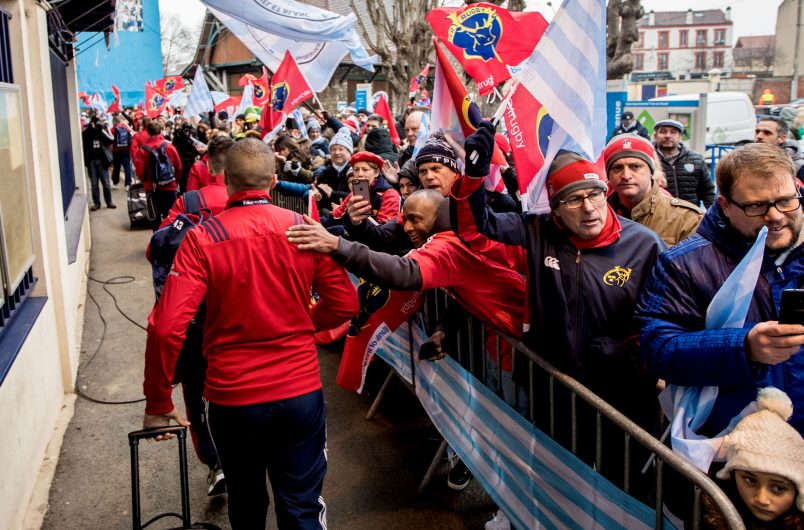 As we prepare to welcome the Racing 92 Supporters this weekend we have a number of plans in place for their arrival. We would encourage all members attending to be at the stadium early and take part in any or all of the below to help them experience the magic of European Champions Cup match day in Thomond Park.

As we prepare to welcome the Racing 92 Supporters this weekend we have a number of plans in place for their arrival. We would encourage all members attending to be at the stadium early and take part in any or all of the below to help them experience the magic of European Champions Cup match day in Thomond Park.

We have been in constant contact with the Racing 92 Supporters Club ahead of both games this year. Though we don't expect a large number of Racing Supporters to be in attendance they are aware of the below and are delighted to get involved.

A number of Racing 92 Supporters will be housed by members of our Supporters Clubs and local B&B's free of charge.

Our Red Experience Venues are stepping up with some offers for the visiting supporters.

Bobby Byrnes, O'Connell Avenue, Limerick have also sent the following: "As a gesture of goodwill in lieu of the kindness shown to our Munster Supporters in Paris – any Racing 92 supporters who visit Bobby Byrnes on either Friday night or before the game on Saturday, wearing their Racing jersey, your first pint will be with our compliments."

Sky Sports will be broadcasting from the MRSC Bar between 3 and 3:30pm. The MRSC Bar will be open from 2:30pm to facilitate this and we have invited members from the Racing 92 travelling support and members of the MRSC USA Branch to join us there. Come along early to meet and welcome both sets of visitors and you may even be on the TV! There will be a contingent moving from the MRSC Bar to the Fanzone after this to take part in the below Guard of Honour.

We will be hosting a Guard of Honour with members of the Racing Supporters Club for the team buses arriving to the stadium on Match Day. We would ask that as many supporters as possible gather at the white marquee in the Guinness Fanzone between 3:30 and 3:45 to pick up a Munster Flag and get instructions on placement for both bus arrivals from 3:50pm – Munster team bus is scheduled to arrive first, followed by the Racing 92 bus.

Join us in this show of solidarity and support and show both teams the famous Red Army welcome that we're known for, as ROG returns to Thomond and our own team face into the most important home game of the season so far.

We have invited two of the Racing 92 Supporters and seven of the MRSC USA Branch members to be in our flag bearing Guard of Honour – they will line out on the pitch, flanking the team as they run out on the field ahead of this crucial game. Make sure to give them an extra big cheer if you see them!

The Downtown Dixieland Band have been booked to play in the MRSC Bar following the final whistle. Join us post game for some some feel-good music that always gets the crowd tapping their feet, singing and dancing along to finish off the group stages of the Champions Cup in style. Again, we have invited members of both the Racing 92 and MRSC USA Branch to join us here so we would hope that as many of you as possible will be in attendance to make it a night to remember.