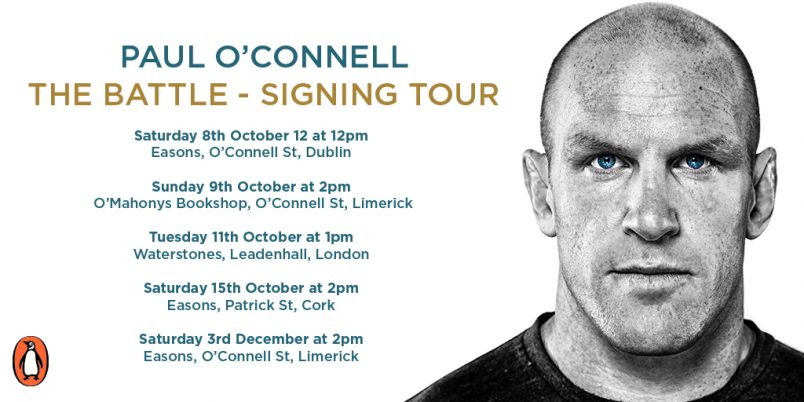 After a very successful release and some extremely popular book signing sessions (see dates above) The Battle, an autobiography from our own Paul O’Connell, is now on sale and we have 3 signed copies to give away exclusively to members!

After a very successful release and some extremely popular book signing sessions (see dates above) The Battle, an autobiography from our own Paul O’Connell, is now on sale and we have 3 signed copies to give away exclusively to members!

There has never been a rugby player quite like Paul O'Connell. His name is synonymous with passion, heart and determination but he is also the thinking man's rugby player, a legendary student of the game.

As the heartbeat of Munster, British and Irish Lions captain in 2009, and captain of the first Ireland team to retain the Six Nations championship, O'Connell became the most beloved and respected of the golden generation of Irish rugby players – and was widely regarded as one of the very best players in the world. There was nothing inevitable – or even likely – about any of this, and in an autobiography as intense and thoughtful as its author, O'Connell explores the forces and struggles that turned him into the player and leader that he became.

The Battle is a book for everyone who wants to understand the roots of achievement and the inner world of an elite sportsman. The book, which has received great reviews already, has been described by Paul as “the full story. I think it’s very honest and I hope people will enjoy it,”

This book is now available in all good book stores for €;25 but to be in the draw to win your very own signed copy of The Battle all you have to do is send the answer to the following question, with your member ID to ciaralyons@munsterrugby.ie

What role does Paul O'Connell play with Munster Rugby currently?

Competition closes on Tuesday the 18th of October at midnight. Best of luck to all entrants.

My Day as Mascot – Rory Heffernan