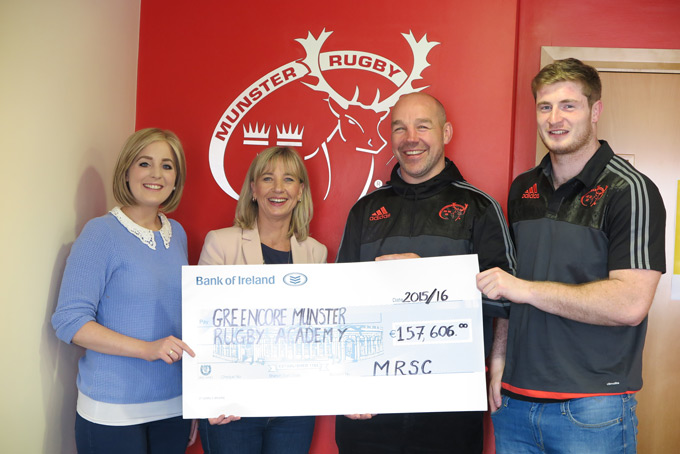 The Greencore Munster Academy is a 3 year player development programme with the aim of developing players to play professional rugby for Munster. To date the MRSC have invested over 1 Million Euro in the Academy through the Giant Draw and the member’s annual Membership Subscriptions.

The Greencore Munster Academy is a 3 year player development programme with the aim of developing players to play professional rugby for Munster. To date the MRSC have invested over 1 Million Euro in the Academy through the Giant Draw and the member’s annual Membership Subscriptions.

The Munster Rugby Supporters Club recently presented a cheque of the members contribution to the Greencore Munster Academy for the year to Peter Malone, Elite Player Development Manager. This cheque for the grand total of €;157,606.00 will go towards funding the development of young players in the Province and brings the overall amount donated to over one million euro!! This tradition of supporting young home-grown talent is an invaluable aspect of being a member of the MRSC and is equally incalculable to the efforts of the Greencore Munster Academy.

Peter Malone, Elite Player Development Manager, thanked the Munster Rugby Supporters Club for their contribution to the Academy year on year. "It's fantastic, we can't tell you how important the MRSC are to what we do here in the Greencore Academy and I would like to take this opportunity on behalf of us all to thank each of the MRSC members for their support again this season. Their investment goes a long way in the tactical, technical and physical parts of training but in particular the money raised by the Supporters Club allows us to bring in extra facilities and activities outside of rugby for the lads such as mental skills workshops, lifestyle modules, cooking demos and so on. It helps hugely with player development outside of what they learn on the pitch which is extremely important. Notably, we have been able to employ the services of Nutritionist Gavin Rackard to work with the Academy players around their diet. This has shown a massive increase in strength, muscle mass and a noticeable decrease in body fat."

A recent success story comes in the form of newly awarded Young Player of the Year and Greencore Munster Rugby Academy Player of the Year Rory Scannell, who became the first Munster Player to ever receive both awards. After enjoying a breakthrough season in his final year of the academy programme the 22-year-old played for Munster on 26 occasions, making the number 12 jersey his own since December, and scored 4 tries, kicking 10 points.

Alex Wooton has become the latest Munster Academy Graduate to sign a Senior Development Contract with the Province. Elite Player Development Officer Colm McMahon said "It's fantastic that Alex's three years in the academy programme culminate in him receiving an opportunity with the senior squad on a development contract. Alex has worked very hard, most recently splitting his time between his academy training, his club Garryowen and his involvement with the Ireland Men's 7s set-up. That's a lot of commitment and it's great to see him get his just rewards for it." Alex joins Rory Scannell, David Johnston and Sean McCarthy in graduating to the Senior Squad this year.

A special mention too for uncapped Munster Academy out-half Bill Johnston who has been added to the U20's Ireland squad, having recovered from the shoulder injury that ruled him out of the Six Nations campaign. He joins a total of eight Munster players who have been called up to the Ireland U20's squad including Vincent O'Brien, Ben Betts, Sean O'Connor, Evan Mintern, Kelvin Brown, Shane Daly and Paul Kiernan who have all taken part in Sub-Academy training. Seven of which played when Ireland U20's came up against the Munster A/Development Squad recently in which Munster A/Development came out on top 26 -24 after a hard fought game.

Munster Rugby Supporters Club Manager Jennifer Kiernan reiterated the impact that MRSC members make to the club as a whole. "We are delighted to play our part in the development of up and coming talent. The Academy is a fundamental part of Munster Rugby and once again this year I would like to thank our members for their continued support in making this annual contribution to the Academy possible."

Make sure you are there to support the next generation of Munster Rugby by joining or renewing to the MRSC for 2016/17 here before Friday!

End of Season Message To Members