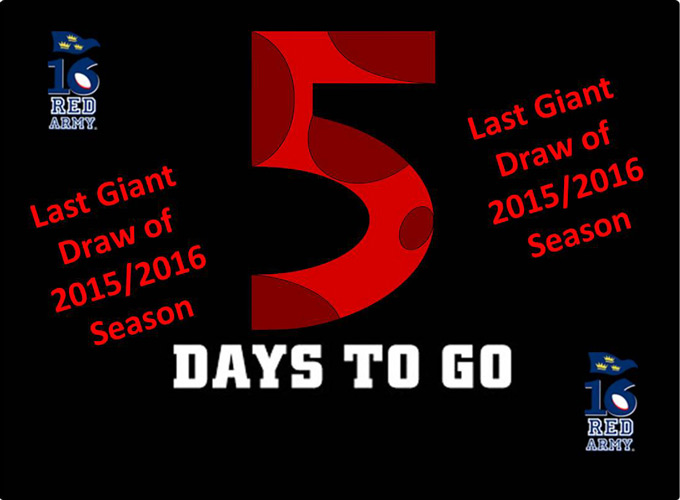 5 days to go before the Giant Draw finishes for the 2015/2016 season……this is your last chance to support the Munster Rugby Greencore Academy AND be in with a chance to win some pretty sweet prizes!

5 days to go before the Giant Draw finishes for the 2015/2016 season……this is your last chance to support the Munster Rugby Greencore Academy AND be in with a chance to win some pretty sweet prizes!

We have saved some of the best prizes for last in the final Giant Draw of the season with a First Prize of €;2,000 in cash.…Our other fantastic prizes include a luxury two night stay in the Kingsley Hotel in Cork including passes for the Spa and afternoon tea. A signed Munster Rugby Jersey, two nights bed & breakfast in the 4* Abbeycourt Hotel, 2 places in one of our Summer Camps and much, much more…

First Prize
The final first prize of the season is a very good one with 2,000 euros in cash for one lucky member, straight into your account!

Second Prize
Two nights in the luxury 4* Kingsley Hotel and Spa, Cork for two including breakfast on each morning, passes to the Thermal Suite plus afternoon tea in the K Lounge.

Third Prize
An Ipad to catch on the latest from www.mrsc.ie

Fourth Prize
Two nights Bed and Breakfast for two guests in the 4* Abbeycourt Hotel, Tipperary with dinner included on a night of your choice.

Eighth Prize
Make a meal of a trip to Thomond or Irish Independent Park with an €;100 voucher for the Cornstore in either Limerick or Cork.

Tenth Prize
Dress like the Munster Squad with a €;100 voucher for Timberland.

Eleventh Prize
Keanes, official jeweller to Munster Rugby, have a stunning pen and cufflinks set for this lucky winner.

Twelfth Prize
A place for 2 children in a Munster Rugby Summer Skills camp of your choice.