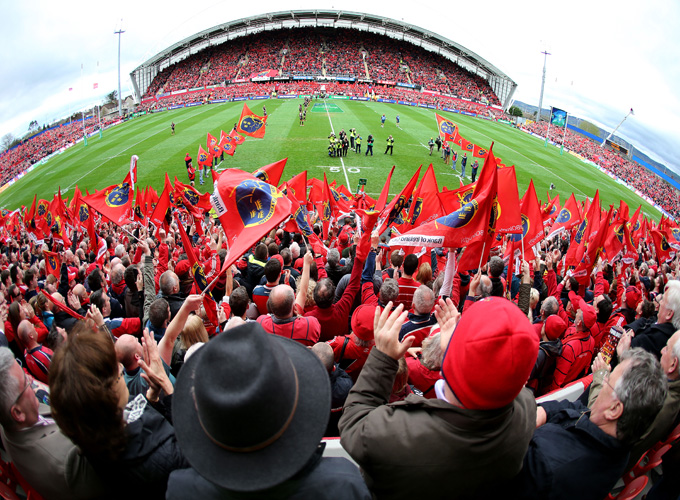 Old rivals Leinster visit Thomond Park in search of revenge in the Guinness PRO12 Round 11 on Friday the 26th December, KO 5pm

Old rivals Leinster visit Thomond Park in search of revenge in the Guinness PRO12 Round 11 on Friday the 26th December, KO 5pm

There’s a Christmas cracker in store on St.Stephen’s Day in Thomond Park as Munster welcome Leinster in the Round 11 of the Guinness PRO12 (KO 5pm), which is also Munster’s annual Charity Match.

Thomond Park PRO12 season ticket cards are valid for this game.  Additional tickets made available to the MRSC are sold out.   A limited number of remaining tickets are currently on sale from usual outlets, and will be on sale from Thomond Park on the day from 1pm (unless previously sold out).

Tickets
Tickets are available to buy:

It’s the annual Charity Match, as Munster supports its official charities for the season – the Irish Heart Foundation and the Irish Guide Dogs for the Blind.  One euro from every €;5 programme sold on the day will be donated to the charities, and both Charities will be presented with signed Munster jerseys at half time on the pitch.

We are delighted to have a very special guest at the game – Ireland’s newest boxing World Champion – Limerick’s Andy Lee, who will be honoured at half time on the pitch.

We welcome back Jean Wallace who will perform Stand Up and Fight pre-match, along with the Munster Rugby Supporters Club Choir.  At half time, Ballina/Killaloe and Carrigaline U11’s will take part in the half time mini rugby display.

SEAT, Official Car Partner with Munster Rugby, are delighted to bring FanPic to Thomond Park for the first time.  Fifteen minutes into today’s game, they are going to take a 360 degree photo of the entire stadium. The day after the game from 5pm you will be able to access the picture at www.munsterrugby.ie/SEATFANPIC.  There will also be prizes on offer for those who tag themselves in the photo as well a treasure hunt within the photograph.

The stadium turnstiles will be open from 3pm, with all bars and food outlets inside the ground open at the same time.

The MRSC Bar will be open from 3pm and there will be a live band preforming before the game, so come along and check out the new upgrades.

There will be lots of activity in the fanzone including the Bank of Ireland Family Funzone which will be open for our younger supporters.  Live 95Fm will supporting the event, and there will be plenty of choice in terms of food and beverages.  There will be live music from 2.30pm, so come and along and check out the new Fanzone, built with you in mind!

The Guinness Dug Out Bar in the Fanzone Plaza will be open from 2pm.

The Munster Rugby Stores will be open at the stadium – the East Stand store open from 2.30pm, and the Mobile unit outside the West Stand from 3pm.

Please note that the new Munster Rugby Museum is open for this game.

Park and Ride will be in operation from the following locations:

Broadcaster
This game will be broadcast live on TG4 and BBC Alba.

The Munster Rugby Supporters Club wish to thank you for your continued support and wish all of our supporters a Merry Christmas and a Happy New Year.