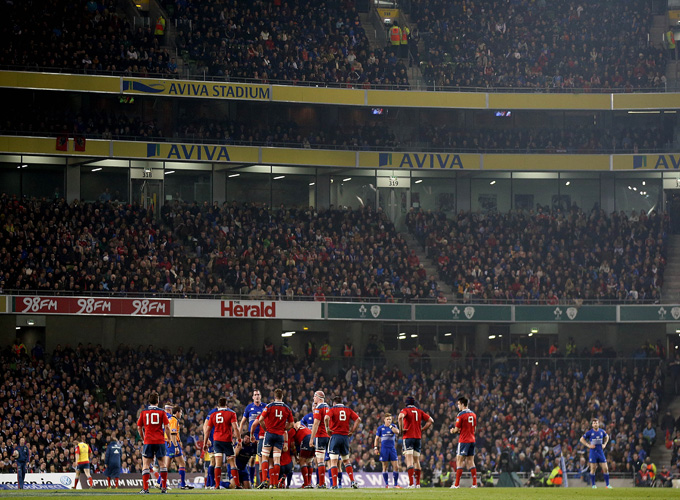 The Dublin Branch of the MRSC have organised the following for supporters travelling to the Aviva this Saturday;

The Dublin Branch of the MRSC have organised the following for supporters travelling to the Aviva this Saturday;

Break for the Border, Stephens Street Lower, Dublin 2 is the meeting point before and after the game for Munster Rugby supporters. Members of the Red Army can avail of €;4 pints at the venue on production of their MRSC Membership card.

Munster fans will be gearing up for the first Interprovincial clash of this season’s Guinness PRO12 away to Leinster. Both sides have played four, won two and lost two so far in the league with Leinster placed precariously just one place above the boys in fifth on the table. Let’s hope the old rivalry will bring out the best in the players and make it a great spectacle to watch.

Leinster have a perfect unbeaten record in their last thirteen games at home in the history of the PRO12 while Munster will be hoping to recreate last season’s performance that saw them overcome the boys in blue last October in Thomond Park.

The team has been announced today with Anthony Foley making a total of eight changes to the starting line-up that faced Ospreys last weekend in Thomond Park, and in the replacements there is a welcome return for Munster's squad captain Peter O'Mahony and Damien Varley.See more here.

Flags will be distributed by members of the Dublin Branch of the MRSC on the roads leading up to the stadium before the game, these are free so please watch out for them and take one.

Munster play Leinster at the AVIVA Stadium in Round 5 of the Guinness PRO12 this Saturday – KO 6:30pm with coverage on Sky Sports 2 from 6pm.

Munster A also face Leinster A in Interprovincial action at Donnybrook – KO 1pm.