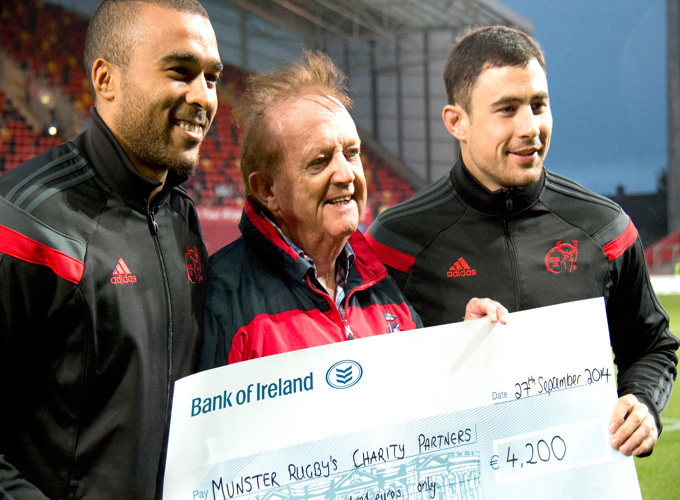 Those of you who were at the Munster v Ospreys game last Saturday may have seen Ivan O’Riordan presenting a cheque at half time to Munster Rugby’s Charity Partners.

Those of you who were at the Munster v Ospreys game last Saturday may have seen Ivan O’Riordan presenting a cheque at half time to Munster Rugby’s Charity Partners.

The cheque was for a total of 4,200 euros which will be very well received by last season’s charities Mid-West Spina Bifida Association and the Cork University Hospital.

Ivan is an accredited photographer with the MRSC and for the past three years has raised money for the charities nominated by Munster Rugby by selling photos taken at Munster matches. The cheque presented at last week’s game brings the total raised since May 2012 to 10k.

The game day photos are sold through the website www.ivanoriordan.com and through Munster Rugby Store outlets and Lifestyle Sports. The Limerick Milk Market on a Saturday morning has also been a successful outlet for raising money. The photos range from those taken at Thomond Park and Musgrave Park to away matches at Paris, Marseilles, Edinburgh, Milton Keynes, Belfast and Galway.

Ivan would like to extend special thanks to the Munster squad for their participation in autographing the mounted photos and in particular to team manager Niall O'Donovan for organising that.

Ivan, who turns 70 this November, has volunteered much of his free time to raising money for charities but says as he has a great love of Munster Rugby it has been a real pleasure.

Less Than A Week Left To Enter September’s Giant Draw