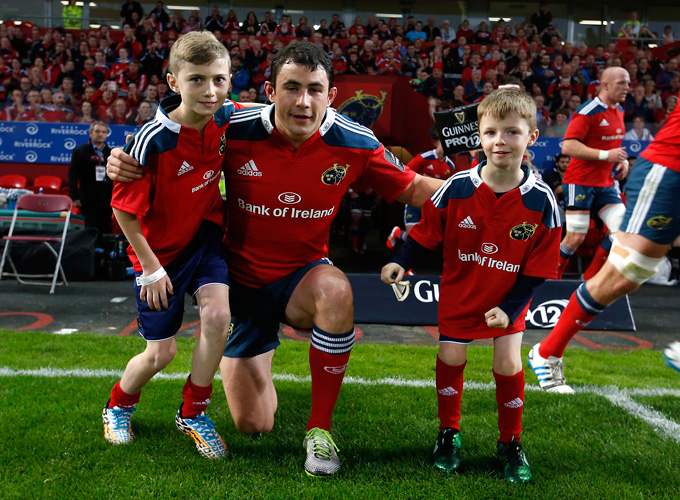 From now until the Friday the 31st of October our younger supporters can sign up to be an integral part of the legendary Red Army in 2015.

There are lots of benefits to being a Junior Supporters Club Member including:

To celebrate the launch of the Junior Supporters Club for 2015, any junior member that renews or joins by Monday, October 13th, will be in with a chance of becoming match day mascot for this season's first home European Champions Cup game in Thomond Park Stadium, Munster V Saracens on Friday October 24th. Luke D’Arcy (pictured above with Captain Felix Jones) was the Junior Club Mascot for the Munster v Zebre game on Friday the 19th of September and he described it as the ‘best day ever’.

Membership is only 25 euro for the year and is open to anyone under the age of 16, once over 16, junior members get to keep their membership number and become an associate Munster Rugby Supporters Club member with all that entails.

New members can join by clicking here
Junior Club members who would like to renew for next year can click here enter their login details and click the Renew Membership tab.

You can also watch out for Oscar around Thomond Park in the new Family Funzone during the month of October for your chance to sign up.

The Junior Club Membership packs are sent out during December so they make an ideal gift for the Munster mad son, daughter, niece, nephew, cousin or godchild in your life.