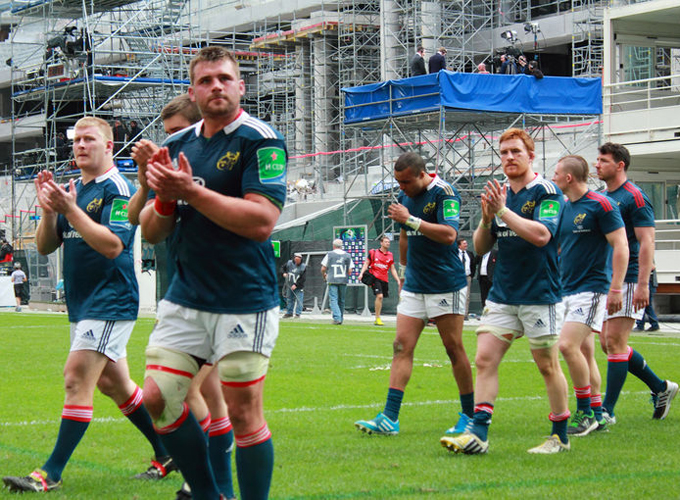 Munster fans have been recognised for their loyal and vocal support both at home and abroad.

Munster fans have been recognised for their loyal and vocal support both at home and abroad.

As we enter the final stage of the season, Munster fans have again been praised for their loyal, vocal and visible support both at home and abroad. Rousing renditions of Stand Up And Fight coupled with a Sea of Red have been a staple part of Munster fixtures this and every season with Head Coach Rob Penney one of the first to shower praise on the 16th Man’s magnificent support

Penny spoke of how the undying Munster support was a massive motivation for the team all season long, recalling in particular Munster’s final Heineken Cup pool game at home to Edinburgh where a bonus point win would secure a home quarter-final and Munster’s 15th quarter-final in 16 years of the competition.

“One of the things we spoke about was our magnificent supporters who follow us around Europe and everywhere we go,” said the New Zealander. “For the lads, it was a small reward for them to be able to come and watch us here at home.

“As a cauldron Thomond Park is a very difficult place for any team to come and play— wonderful reward for the lads and the supporters efforts.”

The players have also been vocal in thanking fans for their recent support.

CJ Stander said “Can't thank the @Munsterrugby supporters who stood behind us enough..especially those who travelled to Marseille!”

Captain Peter O Mahony thanks you for your support & renewing your membership – “Incredible support! Another special day! Heartbroken I won't be with the lads on the pitch for the rest of the competition but it’s great to see supporters renewing @MRSC16 membership for next season. Looking forward to being out there again with you #playyourpart #SUAF”

“Amazing day in Thomond yesterday! Thanks for all the best wishes. Feet up now and enjoy todays rugby!” Conor Murray – the day after the Heineken Cup Quarter Final at Thomond Park

James Downey on the loss in Marseille – “Devastated with the result yesterday.Too many errors and punished by a top side.Thx for support.Congrats to Toulon”

“Thank you for all the support over the weekend it really is greatly appreciated by all the team. Thank you so much @Munsterrugby #suaf” Ian Keatley

Donnacha O Callaghan has a message for the MRSC members “Thank you to everyone for joining already – great to have so many official @MRSC16 fans! #playyourpart”

David Kilkoyne on the supporters at Thomond Park v Toulouse. “Thanks for the incredible support over the weekend! Thomond Park really is a special place #16thman #SUAF”

“I don't think I've ever heard anything like the noise in Thomond Park yesterday! Incredible support! #deafening #SUAF” Tommy O Donnell appreciates the noise of our Red Army.

We received the following message from a Marseille publican who spoke most highly of the travelling Munster supporters;

We have made an attempt to translate this message for you !

I am the owner of pub/restaurant "The Queen Victoria" pub, "O Malleys" and pub "Little Temple Bars" in the old port of Marseille. I wanted to thank you, the Munster club and all its supporters who were great, who were superb and kind throughout the weekend. It was an unforgettable weekend and I will thank you again. I hope that we will see you again next year in Marseille or on your home ground in Ireland for a big Heineken Cup match”.

All Welcome In The MRSC Bar This Saturday