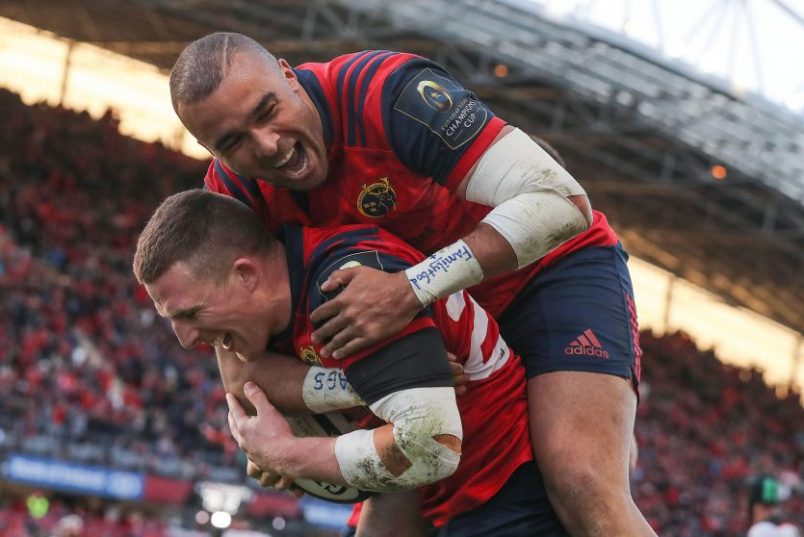 There are six changes to the side that beat Scarlets 19-7 in the Guinness PRO14 last Saturday.
Simon Zebo and Andrew Conway are both back from injury having come through training this week with Stephen Archer and Grand Slam winners Peter O’Mahony, Conor Murray and CJ Stander also returning to the side.
Zebo starts at full-back with Conway and Alex Wootton, Munster’s top try-scorer so far this season, on the flanks.
Rory Scannell, who has played every minute of Munster’s European campaign so far, continues his centre partnership with the impressive Sammy Arnold.

EPCR European Player of the Year nominee Conor Murray starts at scrum-half as Ian Keatley, who scored 61 points in six Pool games, takes the 10 shirt. Dave Kilcoyne, Rhys Marshall and Archer get the nod in the front row as the ever-reliable Billy Holland and Jean Kleyn team up in the engine room.

Captain O’Mahony and CJ Stander come into the back row after their international exploits with no.8 Stander another man to have played all 480 minutes of the European campaign so far. Jack O’Donoghue keeps his place in the team after an excellent performance against Scarlets with the Waterford man moving from blindside to openside flanker.

The all-international trio of Niall Scannell, James Cronin and John Ryan make up the front row cover.
Having both faced Munster as Racing 92 players in last season’s Champions Cup, James Hart and Gerbrandt Grobler are in line to make their European bows for Munster off the bench.