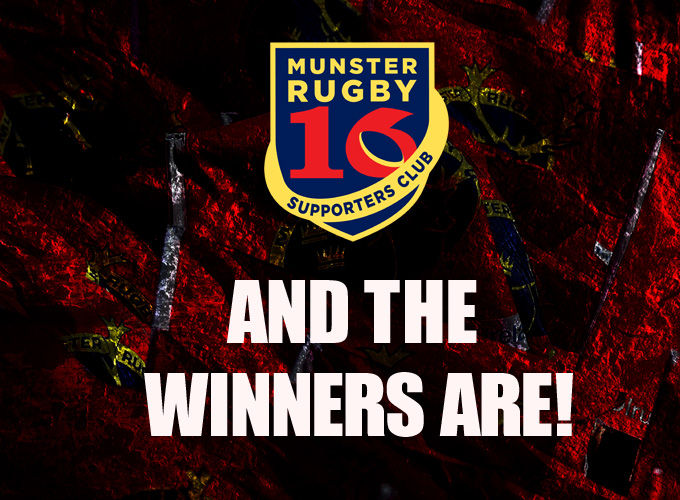 Morgan O’Callaghan scooped the first prize in the September Giant Draw. He has won a trip to South Africa including tickets, flights, accommodation and transfers. Congratulations Morgan!

Morgan O’Callaghan scooped the first prize in the September Giant Draw. He has won a trip to South Africa including tickets, flights, accommodation and transfers. Congratulations Morgan!

There were seven other lucky winners in the September Giant Draw, congratulations to all!

2nd Prize:
Michael Duggan won the second prize which consists of two tickets to Ireland v South Africa in the Aviva as part of the Guinness Series 2017 plus overnight accommodation in the Gibson Hotel, Dublin

3rd Prize:
Eoin Naughton won the third prize which is a coveted Munster Rugby team photo signed by the players plus 2 CAT A tickets to Munster's first home Champions Cup game against Racing 92 and an overnight stay in the Maldron to make it a weekend to remember.

5th Prize:
Thomas Crean will enjoy the Munster v Scarlets game in an executive box in Thomond Park for him and four of his friends.

6th Prize:
Raymond Meade will receive a €;100 Munster Sports Travel Voucher to be redeemed off any one rugby or golf package deal.

7th Prize:
Grainne O’Connell will receive a €;100 voucher for Timberland.

October Giant Draw!
There are eight other fantastic prizes to be won in the October Giant Draw. Simply log in to your MRSC account to purchase a ticket. Tickets cost just €;5, all proceeds go to the Munster Rugby Academy. Click here to view October prizes.