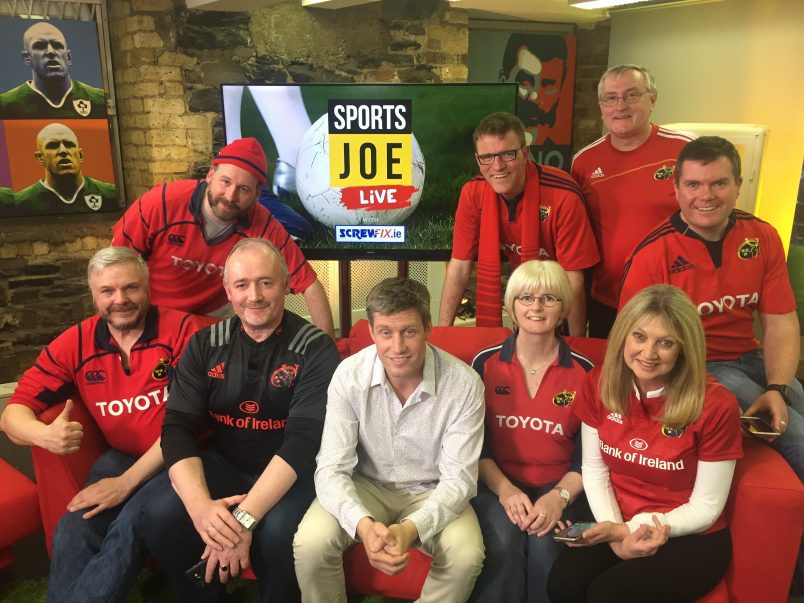 The MRSC are lucky to have a number of dedicated Branches in different areas around the world. Dublin Branch Chairman Kevin Norris tells us about the Season from the perspective of those in the capital!

The MRSC are lucky to have a number of dedicated Branches in different areas around the world. Dublin Branch Chairman Kevin Norris tells us about the Season from the perspective of those in the capital!

As Chairman of the Dublin Branch of the Munster Rugby Supporters Club, I was asked on Friday if I would write a few lines on the Branch and what we do. Having made the commitment I began wondering to myself why exactly Munster Rugby have an affiliated Branch in Dublin, or even London, Brussels and the USA for that matter. While not being able to answer for the others, the idea of a Dublin Branch arose almost a decade ago when 2 guys, Cathal Mulkere and David Lane, watching a Munster match in a pub in Dublin thought it would be a good idea if there was a venue in the Capital where Munster ‘ex-pats’ living and working here could gather to watch Munster Rugby matches together and generate a bit of an atmosphere. From that simple idea, the Dublin branch was born and soon became affiliated to the MRSC.

The primary goal of the Dublin Branch is to ensure that there is a venue where MRSC Members and all Munster Supporters can watch a Munster Rugby match in the capital in good company. As one can imagine, living in the heart of Dublin (and Leinster) this has not always been easy with competition from other sports but we’ve succeeded over the years in establishing contacts and agreeing with various establishments that Munster matches, whenever televised, will be shown regardless of what other matches are on air.

Presently when Munster are playing you will find us entrenched in our official venue, the Riverbar on O’Connell Bridge, right in the heart of the city centre. Generally speaking on a Friday night, we will be upstairs on the left while on Saturdays and Sundays, we dig in downstairs. On match day, we can be found hanging flags and setting up the tables and chairs in the two tier configuration that we have all become familiar with. Numbers can vary from anything between 20 to 200+ depending on the fixture, so we are lucky to have a venue where we can expand beyond our normal area into a bigger space complete with additional temporary seating. This is our second year in the Riverbar and in addition to showing Munster's matches we have negotiated special deals for food and drink on production of cards which the Riverbar had printed especially. These cards don’t work just for match days but throughout the year which is a fantastic offer for supporters. If anyone is ever up in Dublin and wondering where to watch Munster in action, if the match is being broadcast, you are always more then welcome to join us in the Riverbar.

There is a bit more to us than just ensuring a bit of craic and a venue to watch Munster matches however! Due to Munster's fantastic performances on the field this year, Munster secured a home semi-final against Saracens in the European Cup and a Guinness PRO12 final against Scarlets in the Aviva Stadium. On both occasions, members of the Dublin branch were delighted to be able to assist MRSC to bring some serious colour to the venue. On the Friday before the European Cup semi final the lower stand of the Aviva was flagged with 8,000 Munster flags. As the final of the Guinness PRO12 was a neutral venue, we couldn’t flag the stadium in advance, however we did help distribute 6,000 Munster flags to people as they entered the stadium. Sadly, the Aviva has not been a kind venue for us but you can’t deny it was painted a Munster Red both days!

When the Final of the Guinness PRO12 was played in Ravenhill between Munster and Glasgow, the Dublin
branch, through the wonderful organisational skills of Gayl Kennedy, organised 5 buses from Dublin. At the time, Gayl was our PRO and she also writes about all things Munster in her blog which many will be familiar with. (WTView: Observations of a Munster Rugby Supporter) Our current PRO is enviably following the British and Irish Lions in New Zealand. Even so, she still finds time to update our social media pages to make sure we are up to date in Munster Rugby matters. In the past we have run table quizzes with the proceeds going to Charity and we were fortunate to have some past players hosting them. Recently, the Dublin Branch were approached by Joe.ie to ‘make some noise’ on their weekly pod cast which we were more than happy to do.

When I reflect on the year, from the Dublin Branch perspective it has been one of highs and lows, both on and off the field. We had our youngest attendee join us in the form of Leah Fulham, daughter of former committee members, Liz and Peter. This weekend will see a number of us heading to the wedding of James Frost and Annika Radtke who first met while watching a Munster match with us. Sadly, we also had the untimely passing of Anthony Foley. Like many other Munster supporters on October 16th, we gathered together, recounted stories about Axel and generally supported each other.

This brings me back to my original ‘What do we do?’ question. The simple answer is we meet and watch Munster matches, however in doing so, we have provided the opportunity for Munster supporters to establish connections, forge friendships and be Munster Supporters in Dublin – as loud, noisy, passionate and respectful as anyone could expect and without each other, we wouldn’t be the Club we are. We look forward to welcoming any and all Munster supporters based in the Dublin area to join us for the coming season! #NoClubWithoutU