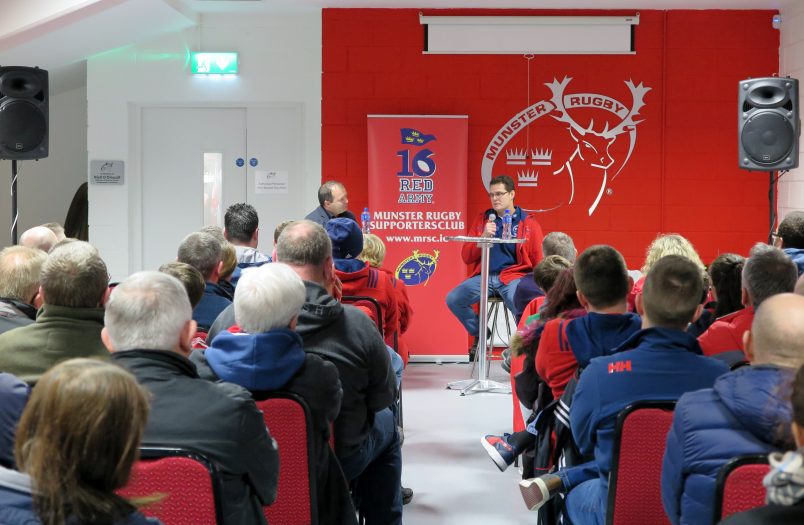 The night was bitter cold but that didn't stop a full crowd of over 120 members coming out to listen to the thoughts and philosophies of one of the newest members of the Munster Rugby family who has made such a noticeable impact since joining this summer.

To take a look at the Gallery of Images from the Q&A please click here.

Refusing to be formally introduced, Rassie entered the room to a round of applause and from there, those in attendance were treated to an honest and open discussion between coach and supporters. Erasmus opened by acknowledging the tremendous attitude and impact that Munster Supporters have had on him.

"I've been all over the world, since 1993, and I just want to thank you… You supporters are just incredible. I've never experienced anything like it"

Mark Meehan, MRSC Committee member and the MC for the evening began by discussing Rassies childhood and his playing career in South Africa. Asked whether he could compare the rivalries in the Currie Cup and later in the Super 12 to our own provincial rivalries with our close neighbours in blue, Rassie once again gave a nod to the supportive nature of Munster supporters and Irish supporters in general. In South Africa, he explained, the fans are a lot more critical, Munster Supporters could go to Leinster and still have an enjoyable experience (winning aside!) but that would not be the case in his experience at home.

His presence as a leader is clear to us here in Munster but when asked about his role as Captain for South Africa, Rassie reckoned he was only picked because they ran out of other people to ask – he classed himself as one of the 'naughty' members of the squad! He also claimed his route into coaching was a lucky break and came about as the result of an injury. Two years in the army (where he met Jacques Nienebar) and studying Movement in University, had given him an interest in coaching and he asked if he could help the Cheetahs with their analysis whilst unable to play. A brief discussion about his almost meteoric rise through the ranks of SA rugby as a Coach, Technical Advisor, Director of Rugby and High Perfomance General Manager then followed.

When asked about a day in the life of the Director of Rugby for Munster, Rassie took those in attendance through a typical week for him and his team, by which we learned their only real day off is Thursday! Rassie was asked about his thoughts on the new High Performance Centre and he acknowledged that some of their relative success this year has to be attributed, in part, to the new facility. He spoke with fascination about the previous dual-centre set up and wondered aloud how in the professional era Munster did so well in the Heineken Cup and beyond operating with that system. Again talks turned to the support from MRSC members and Munster fans in Thomond Park and Irish Independent Park throughout the season. Rassie said that the only way he can describe it is 'personal' and truly 'supportive'.

"They are supportive, they are helping you when it's going bad… I feel they are a knowlegable people who understand why it's not going well sometimes and why it is going well, so it's nice and personal."

Talks turned to Academy players, incoming squad members, management of the squad during international periods, training and match preparations and more and then the mic was opened to the floor where members present got to ask their questions. We had some really interesting (and cheeky!) questions from the floor including one on quarter final tickets and what Erasmus might have done during Scotland v Ireland last weekend. Rassie gave some very honest insights into some of the squad traditions, his relationship with Axel and how the squad are working with him in mind every week. He explained how they deal with each game as it comes by finding the 'thing' each team employs in each game. When asked what Munster's 'thing' is he replied that he encourages the players to 'find the solution on the field'. He explained that they trust the players to know where they are not working well, be it the breakdown, the lineout, the scrum etc, in any one particular game and work out the solution to that problem there and then. His ' coaching philosophy' when asked, is for the team not to focus on their own individual targets but on the game in hand and to remember to enjoy it and feel the pride of playing with Munster.

The Q&A was a very enjoyable and interesting experience and the Munster Rugby Supporters Club would like to thank Rassie for giving his time to speak with our members and also thank the members that came out to make it such a great night.

If you have any feedback on this or any other MRSC events please email mrsc@munsterrugby.ie