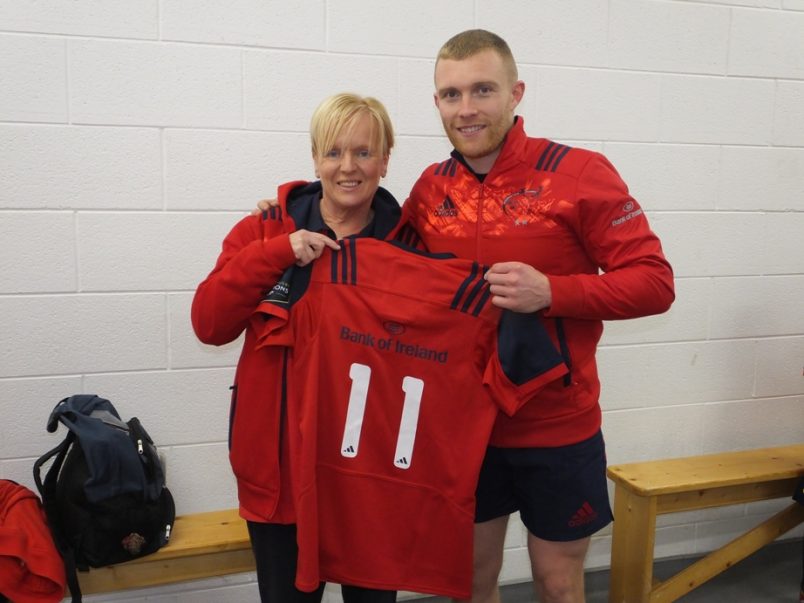 Anne Poole was the lucky member who won the experience of hanging the jerseys for the players ahead of Munster’s European Champions Cup tie with Leicester Tigers on December 10th, below is her account of her day…

Anne Poole was the lucky member who won the experience of hanging the jerseys for the players ahead of Munster’s European Champions Cup tie with Leicester Tigers on December 10th, below is her account of her day…

In October there was an MRSC exclusive competition for MRSC members to win a prize to hang the jerseys for the team before the Glasgow Warriors game. I couldn't believe it when I got a call from the MRSC offices, to say that I won the competition… I was delighted! Unfortunately due to the sad and untimely passing of Axel the competition prize was understandably deferred and so took place before the Leicester game on Saturday the 10th of December instead.

"What a day we had! One that myself and my family will never forget. We met with Ciara at Thomond and Eoghan, my son, and myself were shown into the dressing room to meet with the Munster kitman, Tony Mullins, who kindly allowed me to help him on the day. With his assistance I hung all the jerseys and we had good banter while doing so. Eoghan got to take plenty of photos. We also met Aled Walters, Munster's Head of Fitness, as he came in to start preparations. We were taken on a quick stadium tour and allowed the privilege to take photos in the tunnel."

"We headed over then to the West Stand side of the stadium and in the MRSC Bar we had the pleasure of being introduced to Mike Sherry by Mark Meehan of the MRSC Committee before the game. Then it was time to take our places on the terraces for the match, and what an atmosphere there was!"

"After a brilliant performance and result we were brought back into the tunnel again to meet Keith Earls who kindly presented me with his match jersey and took the time to chat and stand for photos with us, what a gentleman."

"Thanks to all involved for a most memorable day!"