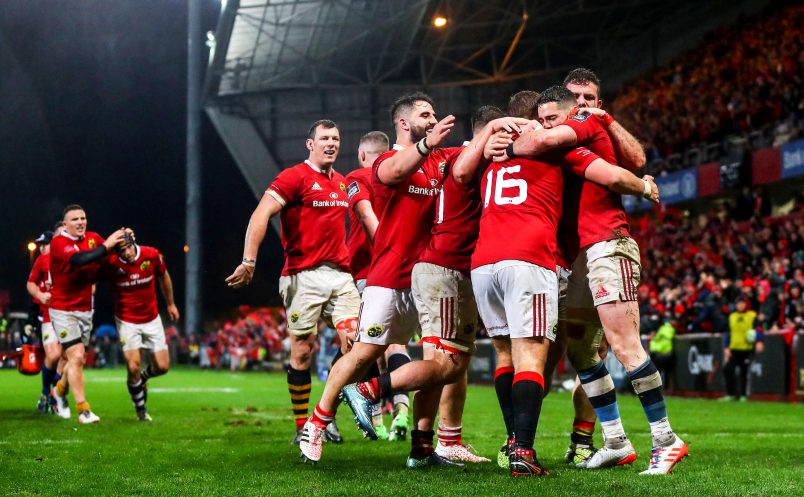 As we reflect on a historic acheivement by Munster in Thomond Park last week we hear from two of our members as they tell us of their experiences, first from John at the MRSC Q&A and then from Fiona and her account of the Friday night where Munster emerged victorious in Thomond Park.

As we reflect on a historic acheivement by Munster in Thomond Park last week we hear from two of our members as they tell us of their experiences, first from John at the MRSC Q&A and then from Fiona and her account of the Friday night where Munster emerged victorious in Thomond Park.

If any of our members have any stories from a game or MRSC event that they would like to share please feel free to email supporterspro@munsterrugby.ie and you may see it in a Red Letter, a match programme or on the website!

MRSC Q&A with the Maori All Blacks – Wednesday Nov 9th

"It had been a while since I had attended an MRSC Q&A, so I was not quite sure what to expect last Wednesday in the MRSC Bar.

Just being in the ground where we were going to face the Maori All Black's two days later was a great feeling in itself, the fact that we were going to be involved in a chat with some of them and our own players… Well, that was just the icing on the cake.

A few of us decided to arrive in early, or so we thought, as it seemed others had the same idea! At 6:45pm the place was already filling up and it is quite a big venue! As we were waiting for the Q&A to start, we got talking to a few around us. Events of the last few weeks were inevitably addressed, Axel passing, how things have been for the side since then. There was a genuine belief that Munster are on the march again. There's a belief within supporters I feel, and what came across to me as almost a defiance in adversity and that we, as supporters, have a job to do as well.

The Q&A session began in a nice, lighthearted fashion though it became somber in parts; particularly during the moment when the MC mentioned Axel's passing. You could tell that all present, including the Maori, understood just how important a moment it was. Jason Emery referenced it well… "Well, he's your Jonah Lomu, isn’t he?"

Inevitably reviews of the Ireland v All Blacks game were made. All of the panel said they were disappointed to lose but if they were to lose, Ireland would be the ones to lose to. Ben May added "I'd be spewing if it was the Aussies or the Poms" .

To be included and to have the opportunity to ask questions from the audience was great and really cemented home the friendly atmosphere that existed between supporters and the players on the night. It was nice to meet some of the 10 Year ticket holders who were present also, who were equally impressed with the event. Nice people, nice evening in a room full of likeminded supporters – well done to the MRSC!"

To view the full video of the Q&A, please click here.

“That is some rain”. Please stop raining before the game starts!!

A gesture for Axel. Wow. So nice… We will always remember these images – thank you so much

The Haka – what are our lads thinking? They look calm

The ball is kicked high into the air; forget the rain time to be the 16th man

How did they just score two offloading tries?? You have to give this skillset credit

Our pack is savage… Try!!

Go on Sweetnam we shout! Try!! We are all standing now, noise all around me, just great

I love when the Supporters sing, sometimes I just listen, take it all in

We have done it, I know we would, I just knew

Here they come out to us, our team, our history, we together are special

The Maori’s are shaking hands down along all the barriers with the 16th Man. We are thanking them, they are thanking us – another image branded into my mind

This is special … But I will tell you a secret, everything Munster Rugby is special

MRSC Meeting Point for Internationals in the Aviva