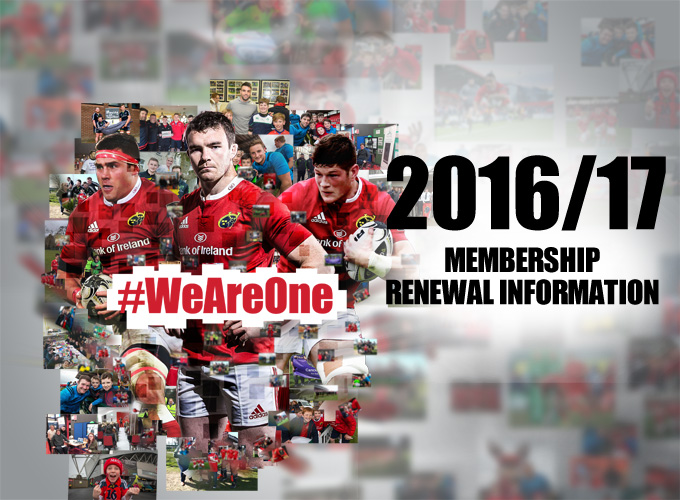 If you wish to renew the same tickets for next season, simply click on the Member Login tab on our homepage, enter your Membership Number & Password, click 'Continue' next to your invoice amount. Remember you need to do this by Tuesday 19th April at 4pm, after this time your seat will be released for general sale.

For any queries, advice or guidance on the process or the options available, please call the MRSC office on 021-4323737.

We had some special guests in the Ticket Office in Thomond Park yesterday ringing our MRSC members reminding them about renewal dates…..check out our video below that captured some calls! Were you one of the lucky ones who got a call???

Important dates for membership renewals and new memberships for 2016/17.

Monday 4th April at 12pm – Tuesday 19th April at 4pm:
Members can renew their membership with the exact same tickets as this season 2015/16.
Members who wish to move their tickets can do so during this period. Members must move all of their tickets. Please see the information on Moving Seats for more detail.

Wednesday 20th April at 12pm – Wednesday 18th May at 4pm:
Members wishing to renew with their same tickets must do so by Tuesday 19th April, after 19th April tickets can be chosen from what is available

Wednesday 20th April at 12pm – Wednesday 18th May at 4pm:
Open and welcoming all new members.

The Wearing of the Green Ballad Festival