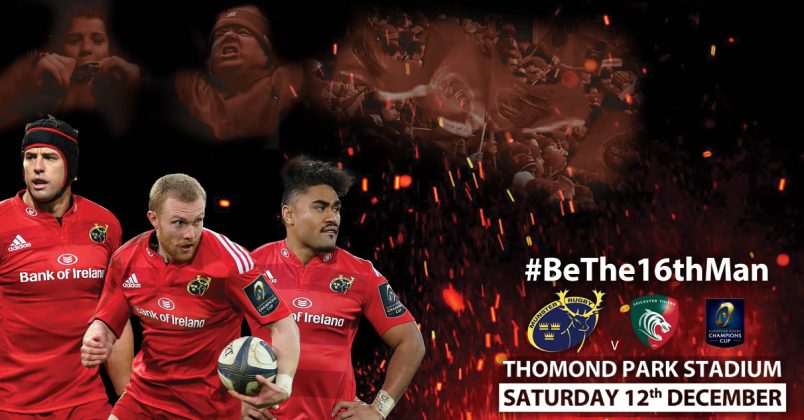 Munster return to European action on Saturday 12th December 2015 and renew acquaintances with Leicester Tigers in Round 3 of the Champions Cup in Thomond Park, KO 7.45pm.

Munster return to European action on Saturday 12th December 2015 and renew acquaintances with Leicester Tigers in Round 3 of the Champions Cup in Thomond Park, KO 7.45pm.

Thomond Park will welcome its 1 millionth European Cup supporter through the turnstiles at this Saturday’s game, 20 years after hosting Munster’s first European game against Swansea in November 1995.

In marking the occasion the Munster Rugby Ticket Office and Thomond Park will be identifying the 1 millionth supporter through the turnstiles on Saturday night and the lucky fan will win a pair of tickets to all of Munster’s home games for the next five seasons.  The selected prize-winner will also receive upgraded tickets for Saturday’s game and will receive their prize on the pitch at half-time.

Brian Hartnett from Newcastle West, Co. Limerick returns to perform Stand Up and Fight pre-match, along with the Munster Rugby Supporters Club Choir.  The dynamic Hit Machine drumming group will also perform pre match and at half time.  The U11’s of Richmond and Skibbereen take centre stage at half time as they take part in the half time mini rugby exhibition game.
Stadium Information

There will be hot food available in MRSC bar for the day, available in the extension area. We would encourage members to avail of the service.

The Guinness Dug Out Bar in the Fanzone Plaza will be open from 4.30pm.

There will be lots of activity in the fanzone including Lorcan Murray on the decks and the Bank of Ireland Family Funzone open for our younger supporters.  Live 95Fm will supporting the event, and there will be plenty of choice in terms of food and beverages all available from 4.45pm.

The stadium turnstiles will be open from 5.45pm, with all bars and food outlets inside the ground open at the same time.

The Munster Rugby Stores will be open at the stadium – the East Stand store open from 5.30pm, and the Mobile unit outside the West Stand from 5.45pm.

Please note that the Munster Rugby Museum is open for this game from 5.30pm-7.30pm.

Traffic & Travel
Park and Ride will be in operation from the following locations:

Weather in Limerick
Unfortunately not a great day expected with rain and low temperatures.

Broadcaster
This game will be broadcast live on BT Sports

Munster Rugby wish to thank you for your continued support.