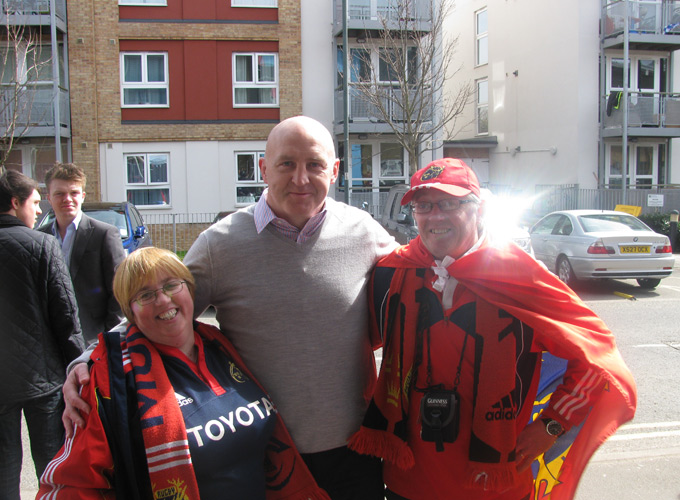 Chris O’Driscoll from Co Limerick, pictured above at one of his many Munster Rugby trips away, was the very lucky MRSC member who won our top Giant Draw prize of 10,000 euros!! He is absolutely thrilled with his win…

Chris O’Driscoll from Co Limerick, pictured above at one of his many Munster Rugby trips away, was the very lucky MRSC member who won our top Giant Draw prize of 10,000 euros!! He is absolutely thrilled with his win…

"How do I feel? I am a little shocked that this fabulous prize has come my way. This win totally changes our options for this season, now I can follow Munster to any of the away matches I want so I am really looking forward to that. We have a great passion for rugby in my family, we also support our local club Thomond RFC at Fitzgerald Park and we are lucky to have Thomond Park Stadium so close to us as well. We are hoping for a great season this year, myself and my sister Mary who arranges MRSC membership and season tickets and the trips for us to the away matches."

"This great win from the MRSC will take a lot of pressure off my family and I, help pay some bills and I will be able to treat the kids to some thing nice this year – they have lots of ideas! Thank you all, the MRSC and the great number of Munster supporters all over who join and go to the matches that makes the Giant Draw possible, from the bottom of my heart for this wonderful prize."

Eamon wasn't the only one to hear some good news; a total of eleven other members also won fantastic prizes in September's Giant Draw.

Don't despair if you weren't a winner this time, we have already begun our October Giant Draw with some more absolutely brilliant prizes – check them out below!

One lucky member will win a Samsung 48" Slim, Smart, LED TV to catch all the Munster highlights courtesy of the MRSC!

An Ipad to catch on the latest from www.mrsc.ie

Two nights Bed and Breakfast for two guests in the 4* Abbeycourt Hotel, Tipperary with dinner included on a night of your choice.

5th Prize Two nights B&B for two in the beautifully restored 17th century Georgian 4* Athenaeum House Hotel overlooking the twinkling lights of Waterford. Gourmet meal on one night in Zak's restaurant included. 6th Prize Make a weekend out of a trip to Thomond Park with one night B&B for two in The Maldron, Limerick which can be used on a match weekend. 7th Prize You and four of your friends will be supporting Munster in style at an upcoming Munster Rugby game in Thomond Park with this prize of an executive box for five!

Lucky winner eight will be the proud owner of a signed Munster Rugby Jersey!

Munster Rugby's retail partner, Lifestyle Sports, have a €;100 voucher up for grabs to spend in any of their stores nationwide.

Keanes Jewellers, official jeweller to Munster Rugby, have a stunning pen and cufflinks set for this lucky winner.

Make a meal of a trip to Thomond Park or Irish Independent Park with a €;50 voucher for Coqbull in either Limerick or Cork.

Remember if you're not in, you can't win – login to your MRSC account here and get your ticket now!