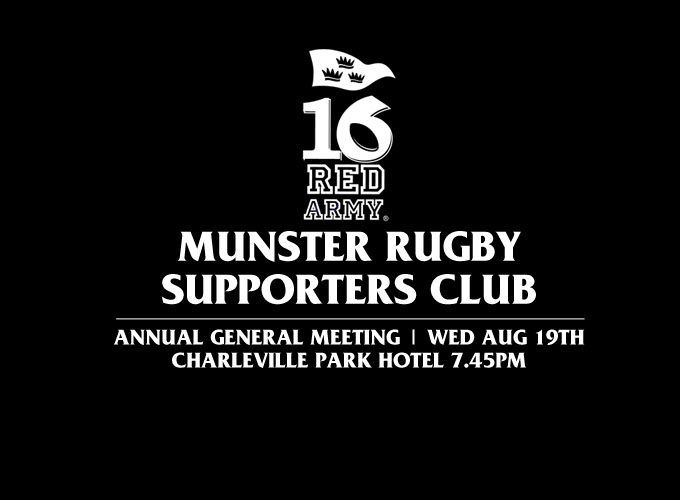 The Annual General Meeting of the Munster Rugby Supporters Club was held on Wednesday August 19th at 7.45 p.m in the Charleville Park Hotel.

The Annual General Meeting of the Munster Rugby Supporters Club was held on Wednesday August 19th at 7.45 p.m in the Charleville Park Hotel.

The committee for the coming season remains unchanged and is as follows:

Main points of the meeting:

On behalf of Munster Rugby, the MRSC Manager Jennifer Kiernan extended a huge thank you to all the members of the MRSC committee who she said contributed some much of their time throughout the season. The committee provided much needed assistance and expertise on match days and with various projects and events during the year and their contribution was invaluable. A thank you was also extended to all members who provided assistance throughout the season.

The Branch committees were also commended by the Committee and Managment for their great efforts over the course of last season, with particular reference to the London Branch in their successful work in bringing all four provincial supporters clubs and Irish rugby supporters club together for some upcoming events in London for Rugby World Cup 2015.

A moment of reflection for past members then followed.

The committee looked back on a successful year, from their vital contribution to the Munster Academy and Squad, to the funding and naming of the upgrade of the East Terrace in Irish Independent Park, upgrades to the MRSC bar, to the sold out Junior Club Christmas party. The committee are very active, regularly hold meetings to facilitate changes and are hard at work for all home games and a selection of away games.

Full AGM minutes will be available to view on the website shortly. There were two motions on the Agenda which were discussed at length and voted upon. Both of these were defeated on the evening.

The MRSC are looking forward to the coming season and hope to see you at some of the trips, events and games over the next year. For anyone who couldn't make the AGM and would like to be part of the General Help sub-committee this season, please email supportersclub@munsterrugby.ie.

The MRSC would like to thank those who attended the meeting and all members for their continued support.