Munster Rugby on Course for Fifth Sold Out Home Game 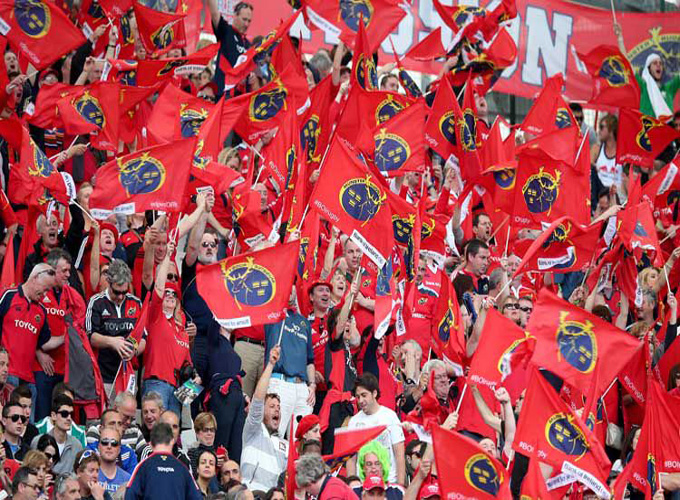 It is looking likely that Munster v Newport Gwent Dragons will be Munster Rugby’s fifth sold out game this season, showing that supporters are coming in their droves once more to #ContinueTheJourney

It is looking likely that Munster v Newport Gwent Dragons will be Munster Rugby’s fifth sold out game this season, showing that supporters are coming in their droves once more to #ContinueTheJourney

The role of the supporter is extremely important in any game and the Munster Rugby Supporters are stepping up to the challenge with four sold out games at home this season so far excluding the Ireland Wolfhounds v England Saxons sell out in Irish Independent Park in January of this year.

To put the level of support this year into context:

The Munster Rugby Supporters Club would like to thank each of you for standing up and fighting with the team this season. As a result of both this and the dynamic pricing system the value of a Season Ticket has also grown considerably. We are open for renewals and new members until next Friday, the 22nd of May so make sure you don't miss out and join us today!

We are delighted that so many supporters have signed up to #ContinueTheJourney so far and don't forget that if your budget is a little tight we do have a stage payment option available to make it easier for you to join us.

From speaking directly with members during the renewal period, we are aware of the challenges supporters face with Friday night games and we understand this has been an ongoing issue for some of you. While Friday night fixtures are a part of the PRO12 agreement with various broadcasters and are unavoidable, please note Munster Rugby are always in discussions with the tournament organisers and broadcasters in trying to minimise the impact kick-off times have on our supporters.

With the redeveloped Irish Independent Park and Thomond Park Stadium available to us for the full season next year, we envisage a varied selection of kick-off times for our supporters across both venues and hope this will reduce the congestion of similar kick-offs in one venue.

As always, if you have any queries, please do get in touch with us in the MRSC office at mrsc@munsterrugby.ie or call us on 021 4323737. We look forward to continuing the journey with you all.