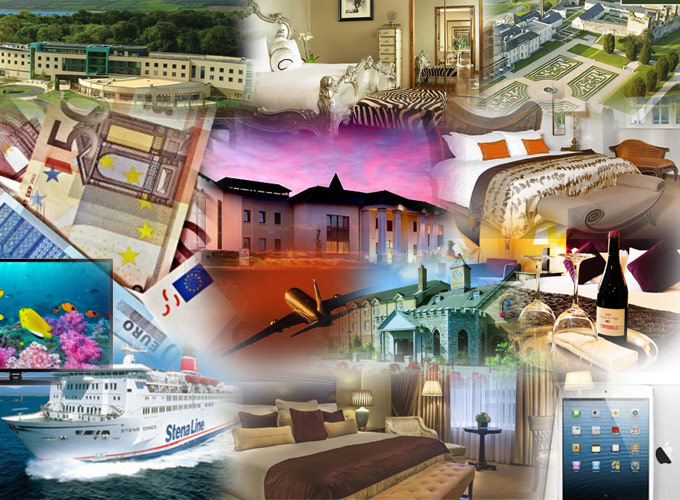 The Giant Draw is a very popular benefit to being of the MRSC being exclusive only to members. This year we gave away over 70 prizes including more than 14,000 in cash, 5* hotel breaks, holidays and much more. Not only this but through the Giant Draw our members raised over €;50,000 which went directly back to rugby in the province – mainly through the Munster Rugby Academy.

When renewing or joining as a new member to the Munster Rugby Supporters Club, members have the option to purchase a ticket for September's Giant Draw – see the full list of prizes for September below. As well as this members also receive a free entry to December's Giant Draw (see below) which has the top prize of a holiday voucher worth €;2,000.

Members who have signed up to #ContinueTheJourney with us next season will be made aware of the dates they can purchase for all draws.

September's Giant Draw is absolutely bursting with fantastic prizes! The top and most coveted of these being a massive €;10,000 for one lucky member – it could very easily be you! Our other amazing prizes include two nights B&B for two guests in the 5* Fota Island Resort, Cork, a photoshoot for a family in brand new Munster gear sponsored by Bank of Ireland, tickets in an executive box for you and four friends for a game in Thomond Park and much more…. See full September prizes here

In our second Giant Draw of the Season our fantastic prizes include a first prize of a Samsung 48" Slim Smart LED TV, two nights B&B plus a gourmet meal in the 5* Castlemartyr Resort, a Jersey signed by the Munster Squad and much, much more… See full October prizes here

November's Giant Draw includes an incredible first prize of €;2,000 direct to your bank account – just in time for the Christmas Season! What member doesn't want to win that prize? Along with that we have an overnight stay in the 5* G Hotel with gourmet dinner included, vouchers for the Cornstore, Lifestyle Sports and Timberland and a whole lot more besides… See full November prizes here

December (every MRSC member receives a free entry to this draw)

The MRSC are going to help you beat the January Blues with December's Top Prize of a holiday up to the value of €;2,000 with Killester Travel. We also have 11 other unbelievable prizes up for grabs including a 2 night stay in the historic 5* Shelbourne Hotel in Dublin, a pair of predator boots from Adidas, 1 night of luxury plus dinner in the Athenaeum House Hotel and lots more besides… See full December prizes here

Get the year off to a good start with January's first prize of a 48" Samsung Slim LED Smart TV. We also have a number of other fantastic prizes including a return trip for a car and 4 people courtesy of Stena Line, 1 night B&B in the Maldron, Limerick on a match weekend, a €;50 voucher for a meal in Coqbull Cork or Limerick, an overnight stay in Killarney courtesy of an tOireachtas and lots more… See full January prizes here

We have saved some of the best for last in the final Giant Draw of the season with a First Prize of €;2,000 in cash!! Perfect to invest in some season tickets in the coming months! Our other fantastic prizes include a luxury two night stay in the Kingsley Hotel in Cork including passes for the Spa and afternoon tea. A (priceless!) signed Munster Rugby Jersey, two nights bed & breakfast in the 4* Abbeycourt Hotel, 2 places in one of our Summer Camps and much, much more… See full February prizes here