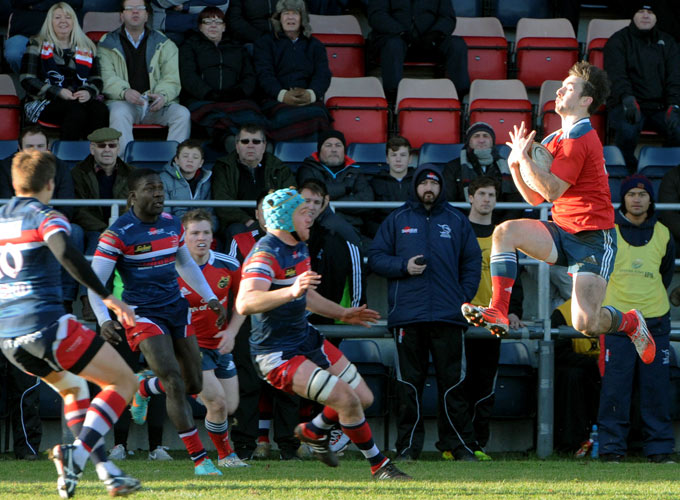 As the Giant Draw reaches its final month for this season we take a look at the goings on in the Greencore Munster Academy.

As the Giant Draw reaches its final month for this season we take a look at the goings on in the Greencore Munster Academy.

The Greencore Munster Academy is a 3 year player development programme with the aim of developing players to play professional rugby for Munster and Ireland. The MRSC fund a large portion of the Academy activities through the Giant Draw and other fundraising methods.
The Academy were treated to a special Mental Skills Workshop with Sports psychologist Tadgh MacIntyre this week.

Tadgh covered an number of important techniques such as discussion into the rationale behind each approach and exercise, and their subsequent benefits to players. Tadgh’s approach includes the use of a practical project called ‘Mind Matters Resilience Training’. This is designed to provide players with online training to supplement their mental skills, which teaches young players psychological literacy and an understanding of how their mind works and how they operate as a team. “Each participant has a player buddy – a team mate they can rely on. In rugby you are required to perform as a team, in units and sometimes as pairs and an individual. We use that dynamic as a turn-key to them learning new things and to help one another take on new challenges. “Sometimes we do parings by position – half backs paired together, etc – and sometimes we do it by personality where someone who is strong in particular attributes works with someone who may not be as strong in those areas.” The theories and strategies taught by Tadgh translate to three main areas for players – on the pitch, off the pitch in their study and work domain, and off the pitch in their personal lives. “We’re looking at players being content within the bubble of rugby, but also having something strong and meaningful outside of that bubble. The reality of professional sport is that players do and will get injured. Therefore, preparing Academy players mentally for recovery is another key component of Tadgh’s work, optimizing resilience and, in turn, recovery. “This is perhaps the biggest hurdle many will face in their Academy and professional careers. “We always make sure an injured player has a mentor, be it a Senior player or another Academy member who progressed quickly through an injury. They work together in twos and threes and become almost like a recovery club. “This is another reason why it’s good to have other pursuits and interests outside of the bubble. If your source of confidence for being a person is based solely on scoring tries and clearing out rucks, etc, and suddenly you can’t do that for a number of months, then it becomes a dark world very fast."

Peter Malone, Elite Player Development Manager, thanked the MRSC for their contribution to the Academy year on year. "In relation to the extra activities such as the Mental Skills Workshop we ran this week or the Lifestyle Modules and cooking demos we do, none of that would be possible without the money we receive from the MRSC. It helps hugely with player development outside of what they learn on the pitch which as Tadhg has shown is extremely important"
The Munster ‘A’ Team reached the Quarter Final of the B&I Cup but unfortunately suffered defeat at the hands of the Doncaster Knights – full time score: 38-17

This was a tough defeat for the squad with Doncaster winning the battle up front and getting a lot of mileage from their mauls that led to four tries. Colm McMahon, Development manager for the Academy told us:
“It was quite typical of what we’ve seen before from the English Championship sides in the B&I Cup – bruising and physical. That cost us mainly at set piece.Outside of set piece we were well in the game but didn’t get enough primary possession to exploit them.”

Management are hoping however that their players will learn a lot from tough tests like that. It’s a learning curve, especially for the younger Academy, sub-Academy and U20 players who featured.
“You learn fast in that environment and it’s a reality check that this is the level guys need to reach in order to compete in professional rugby.”

There was good news in camp however with the inclusion of Greg O’Shea, Jack Cullen, Stephen Fitzgerald and 2 Sub- Academy players – Sean McNulty and Bradshaw Ryan who was called up to train with the squad this week. The coaching staff also have one or two hopefuls waiting in the wings if any opportunities arise during the competition or for the upcoming Junior World Cup. Colm McMahon is delighted for the chosen members – “The opportunity to represent their country is a massive honour, but more than that, the opportunity to pit themselves against the best in Europe at that age grade will be hugely beneficial.”

Academy’s Jack O’Donoghue, Rory Scannell and Darren Sweetnam were also included in this week’s Senior Squad Training camp in Lanzarote: “More good experience for the lads. All three have impressed when called into the Senior fold this season and hence have featured a lot in Senior sessions this season. A week away with the Senior squad will be a good bonding experience for them, while training in the warm weather conditions will make conditioning both tough and hugely beneficial.”

Speaking of Sweetnam, the Year Three Academy player recently signed a two year contract, moving to development status for 2015/16 and full contract for 2016/17. Another success story for the Greencore Academy system by all accounts. “He’s a great athlete who could have made it in a number of sports and we’re delighted that he’s been seen as good enough to move up to the Senior squad. Speaking to Darren, I know that he’s very excited by the opportunity.”

Peter Malone added "The inclusion of players like Jack, Rory and Darren in the Senior Squad just goes to show the importance of the Academy in developing young players and that they are ready to step up and be counted. We are delighted that both Jack O'Donoghue and Darren Sweetnam have signed contracts, we are happy with the numbers moving on to Senior level but obviously we are always trying to improve and push for more."