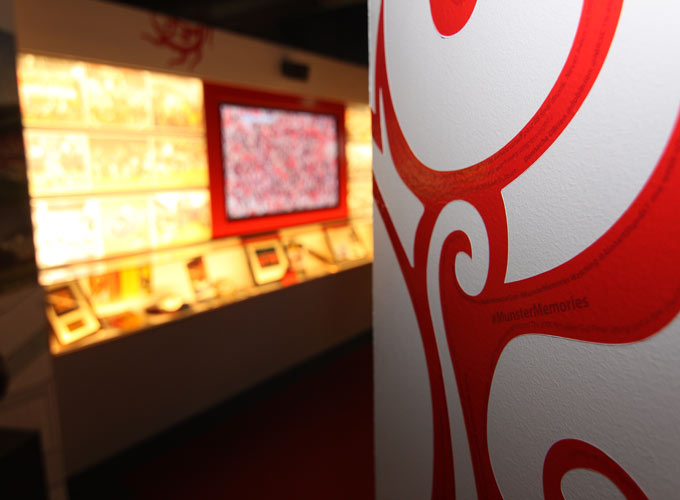 Following its refurbishment and relocation to the Fan Zone Plaza at Thomond Park, Mr. Ring, Minister of State at the Department of Transport & Tourism, was joined by a number of dignitaries – including President of the Munster Branch Mick Goggin, Deputy Mayor of Limerick Maria Byrne, Councillor Kieran O'Hanlon, Suzanne Trehy of Failte Ireland and Finance Minister Michael Noonan – at the opening ceremony which took place before Munster's Champions Cup clash against Sale Sharks.

The experience provides a fascinating insight into the history and heritage of Munster Rugby and includes interactive content to be enjoyed by both young and old.

In recognising the devotion of supporters throughout the seasons, we sent a call out to supporters, to share their favourite #MunsterMemories. Following a massive response many of these memories are now intertwined in the tribal motif that runs throughout the museum.

Featured #MunsterMemories include: @lindymoll #MunsterMemories – Stepping off the train in Lille, April '01 and being in awe at the amount of Munster support. That's when the affair began! @niamhieobrien #MunsterMemories – Doing a heavily pregnant version of the victory dance when Strings scored 'that try' in Cardiff '06 and waking my sleeping toddler twins @astrantiaroma #MunsterMemories A stormy mucky night at Thomond but such great atmosphere when Munster beat Australia in 2010

Why not check out the Museum and see if your Memory made it onto the wall?

The Munster Experience Museum is open on matchdays, with pre-bookings required for all non-matchdays. For more information and to book contact Cathie on 061 421109 or museum@thomondpark.ie

Message From Peter O’Mahony – We Need To Deliver