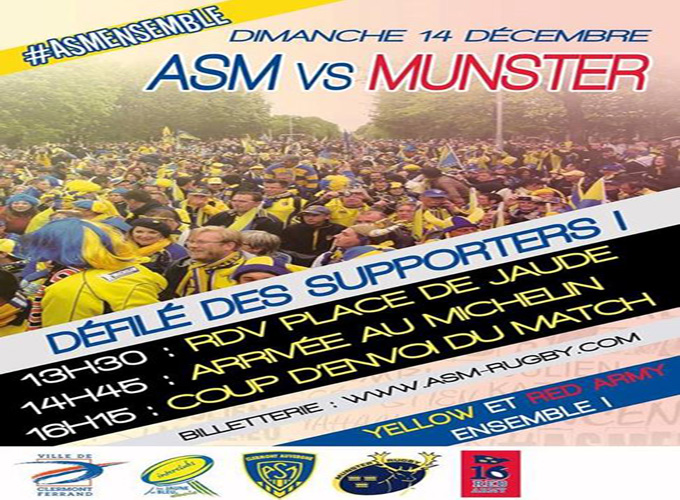 The Red Army march on in Europe once more as Munster take on Clermont Auvergne away this weekend. Please find information below on the MRSC agreed meeting points for the city centre area.

The Red Army march on in Europe once more as Munster take on Clermont Auvergne away this weekend. Please find information below on the MRSC agreed meeting points for the city centre area.

Despite the disappointment of last week, we can really make this weekend something to remember.

One of the most exciting and unique experiences that we hope you avail of is the invite we have received from the ASM Supporters Club to join their members in the main square in the city of Clermont-Ferrand on the day of the match as outlined below and for both clubs accompanied by local bands to parade and march the 20 minutes to the ground. The city of Clermont Ferrand has also kindly provided free local transport to the city centre between 12:30 and 13:30 on Sunday when you present your match ticket so Munster fans can attend the march.

The ASM Supporters Club are very excited for our visit and have released another message reaching out to both clubs to join the festivities.

“Come and join up with the Yellow Army on Sunday 14th December as we welcome Munster and its famous Red Army! The ASM supporters club, in partnership with the town of Clermont Ferrand, ASM Rugby and the Munster Rugby Supporters Club, invite the supporters of both teams to parade through town just before the match.

This event, which will happen for the first time in Clermont as a symbol of the great relationship between both groups of supporters, will be in a great rugby atmosphere with ASM's brass band and drums to liven things up as we march.

Supporters are asked to meet at 1:30pm in the Place de Jaude square to share this moment with the supporters of both clubs, let’s paint the town Red (and Yellow!) before heading to Marcel Michelin stadium ! #ASMensemble”

Let’s have a real show of support for Munster on the day in Place de Jaude square, what better way to add to the pre match atmosphere than this – the Red Army will literally march on in Europe!

Below are some of the official Meeting Points for the weekend:

Cafe Pascal : A local rugby bar on one of the 2 main squares in Clermont (Place de Jaude) A favourite for travelling fans, it has usually been full of singing Munster men and women on our previous visits.

All of these bars are within about 400m of each other.

Clermont-Ferrand is located on the top of an extinct volcano in the Massif Central region of France. The area is well known as the home of Michelin tyres but something may not be aware of is that the famous guide books of the same name were originally designed to encourage people to use their cars for tourism, and in the process use more tyres!

Clermont is a university town and is home to some of the most passionate rugby people you could meet. Munster supporters who were fortunate enough to make previous visits in December will remember the weekend which, although involving freezing temperatures, was one of the standout trips in our European Champions Cup history. Following the frequent clashes between the two sides in recent times, many supporters argue that Clermont is among the top rugby destinations in Europe.

From the 30th of November the popular Clermont Christmas markets with more 70 decorated chalets will be taking place in Place de la Victoire (Victory Square), Enjoy a 'vin chaud' while you take in the crafts and souvenirs from local sellers.