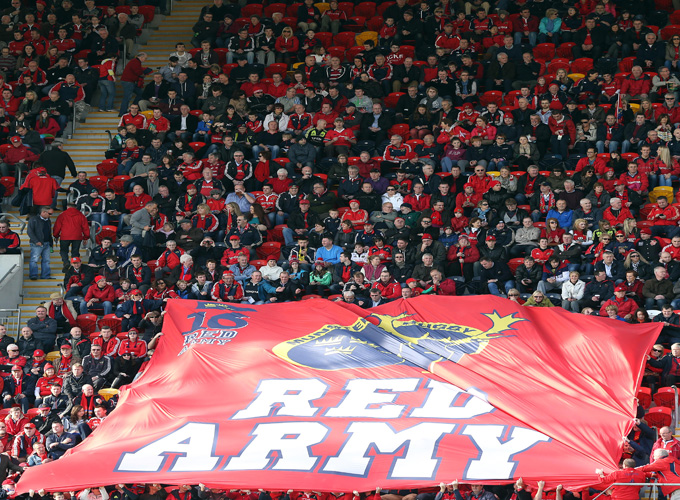 It’s Round 3 of the Champions Cup on Saturday, with Munster and Clermont Auvergne squaring off in what looks set to be an epic battle in a SOLD OUT Thomond Park.

The MRSC Bar will be open from 3:30pm in the West Stand. We had a very successful Q&A with Keith Earls and Damien Varley in the bar before the Ulster game last week to show off all the new changes including a bar extension, new windows and kids area. With lots going on every match day be sure to pop in. Members are encouraged to bring a guest to see the upgraded bar once the guest has a valid match ticket.

The Fanzone Plaza will be up and running from 3pm, with the Guinness Dug Out Bar open, with live music in the Plaza from 3.30pm.

There’s lots of activity for all the family – the Bank of Ireland Family Funzone will be open for our younger supporters.

Live 95Fm are supporting the event, and there will be plenty of choice in terms of food and beverages.  The new Munster Rugby Museum will be open from 3.30pm.

SEAT, Munster official car partner, will be in the Fanzone looking after the supporters whatever the weather, giving out handwarmers, ponchos and wristwatches.

There will certainly be a battle on the pitch come 5.30pm, but there will also be a battle in the Fanzone, with medieval knights representing both teams facing off at 4.15pm in a blast from the past!

Make sure you take a free Munster flag from one of our MRSC volunteers, and to get you in the Christmas mood we have lots of free red Santa hats to hand out!

The stadium turnstiles will be open at 3.30pm, with all bars inside the ground open at the same time.
We welcome back Sinead O’Brien who will perform pre-match, as well as the Munster Rugby Supporters Club Choir.  The 27 Brass Band will keep things lively during the warm up and again at half time.

At half time Crosshaven RFC and Killorglin RFC U11’s take to the field, and one lucky supporter at the game will take home an iPad mini.  To be in with a chance to win, simply purchase a match programme, costing €;5.  They will be on sale outside and inside the stadium.

The Munster Rugby Stores will be open at the stadium – the East Stand store open from 3pm, and the Mobile unit outside the West Stand from 3.30pm.

There will be stewards and security on site to assist you with your enquiries on the day, and to ensure that the event runs smoothly and safely.

The following services will operate for supporters travelling home after the game:

Further details of the train services are available through the following link. http://www.irishrail.ie/thomond

Parking
Supporters can pre-book their parking online for the Q-Park at Harvey’s Quay online at www.q-park.ie

There is no parking in the vicinity of Thomond Park Stadium.

Weather in Limerick
A bright day expected with sunny spells, however some showers expected in the evening.  Temperatures staying around 9 degrees.
Broadcaster
This game will be broadcast live on Sky Sports

The Munster Rugby Supporters Club wish to thank you for your continued support.