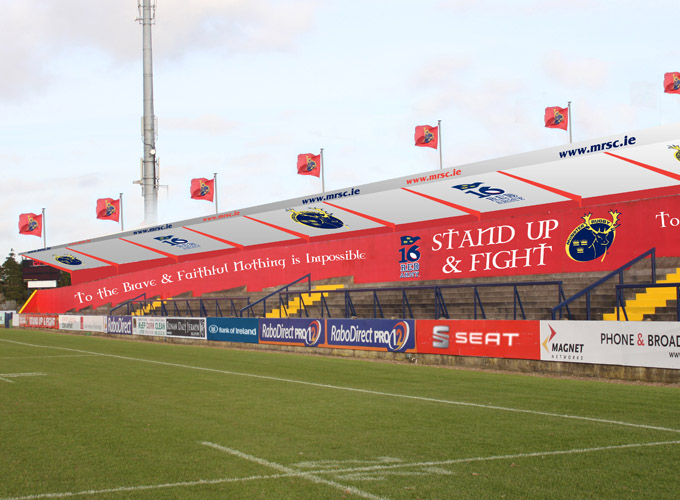 The Musgrave Park Redevelopment Project has been given full approval by the Munster Branch with work to begin next month.

The Musgrave Park Redevelopment Project has been given full approval by the Munster Branch with work to begin next month.

The new facilities will be completed by the end of November this year with the capacity increasing from 8,500 to just under 10,000.

In the plans is a new West Stand which will hold over 3,500 supporters as well as dressing rooms, a hospitality area, media facilities, medical facilities, and public toilets. Additionally, the Munster Rugby Supporters Club are funding work that will see the East Terrace covered in order to enhance the supporters’ experience at the venue.

The temporary stand that was erected in August 2011 has already been dismantled and moved off-site with work to begin on the new stand next month.

Work on the East Terrace will begin after the Il Divo concert in June with the covering of the terrace to be completed for the start of the 2014/15 All-Ireland League season.

The entire redevelopment will be completed by the end of November which means that Musgrave Park will still be in a position to host four Munster matches next season.

The project will be funded through existing capital development funds allocated to Musgrave Park, a National Lottery grant already in place, the sale of a plot of land on the east side of the ground and funding from the MRSC. The existing pitches are unaffected.

Commenting on the project, the Chairman of the Munster Rugby Development Committee, Denis Kelleher said “The redevelopment of Musgrave Park has always been one of our long-term strategic objectives. The new stand and facilities ensure Munster can continue playing competitive matches in Cork, in addition to hosting numerous club and schools matches. I would like to thank all those that have made this project happen, both past and present, as we continue to enhance our playing facilities in the province.”

The plans for the redevelopment are available to view in Reception of our Musgrave Park offices located at the Sunday’s Well end. The offices are open from 9am-5pm on Monday to Friday with supporters welcome to view the exciting plans.

Want To Promote Your Business With Us?