FOLEY CONFIRMED AS NEXT HEAD COACH 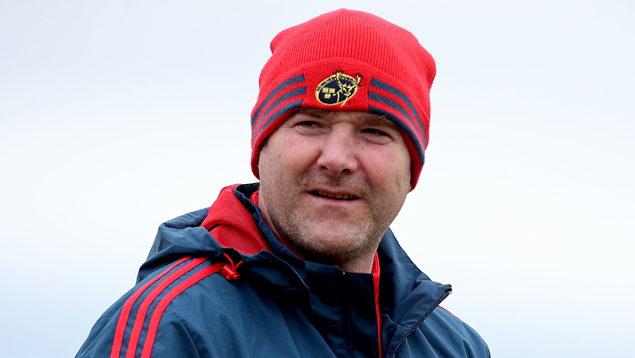 Munster Rugby and the IRFU are pleased to announce that Anthony Foley will be promoted from Munster Rugby Forwards Coach to the role of Head Coach from July 1st 2014.

Munster Rugby and the IRFU are pleased to announce that Anthony Foley will be promoted from Munster Rugby Forwards Coach to the role of Head Coach from July 1st 2014.

Munster Rugby today announced that Anthony Foley will be promoted from Munster Rugby Forwards Coach to the role of Head Coach from July 1st 2014.

Anthony Foley will commence the role of Head Coach at the start of the 2014/15 season after signing a two year contract that will see him stay with the province until at least June 2016.

Foley, who has 201 caps for Munster, retired from playing at the end of the 2007/08 season and joined the Munster backroom staff in July 2008 as Technical Advisor and Assistant Coach for Defence. During this time he was also Head Coach to the Munster U20s and to the Munster British & Irish Cup squad that reached the inaugural B&I Cup final in May 2010.

He moved on to his current position, Munster Rugby Forwards Coach, at the start of the 2011/12 season.

In addition to this the 40-year-old has experience at national level as the Forwards and Head Coach for the Ireland Wolfhounds and Forwards Coach for Ireland.

Commenting on the appointment CEO Garrett Fitzgerald said, “Anthony was the stand-out candidate to succeed Rob Penney at the end of the season and I believe he will do an excellent job in leading this squad forward. His experience and knowledge is of huge benefit to this young Munster side and I’m sure it will be an easy transition for both the players and backroom team to carry on the positive progress already made.

I am glad that all parties could come to an agreement in such a prompt manner as we continue to focus our efforts on the remainder of the season. In the next few months Anthony will continue to play his part in the coaching team, supporting Rob, as Munster challenge for silverware in both competitions.”

On confirmation of the promotion Anthony Foley added, “I am very happy to be selected as the next Munster Rugby Head Coach. It is a huge honour and privilege for me.

I am very fortunate to have played and achieved success with this club at the top level, my home club, and now I look forward to leading the next generation of Munster players to future success in the red jersey.

But before that we have a job to do this season and I will continue to play my part, working closely with Rob, Simon and Ian, as we push for titles.”