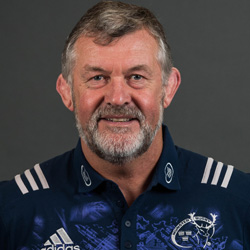 A Shannon clubman all his life, Niall represented the Limerick outfit in the senior ranks for almost 15 years. A number 8, Niallo (as he is known amongst the rugby fraternity) would also earn provincial representation for almost eight of those years.

An impressive coaching career saw Niall initially coach Shannon to All-Ireland League title wins in 1994, ’95 and ’96, and to a further title as the club’s Director of Rugby in 1997.

From there he became the Assistant Coach with Munster up until the end of the 2001/02 season after which he spent six years as Forwards Coach to the Ireland Senior squad.

In more recent times he has acted as Team Manager and Forwards Coach to the Munster British & Irish Cup squad who contested the inaugural final and won the title in May 2012 with victory over Cross Keys.

Appointed as the Munster Rugby Team Manager in June 2012.