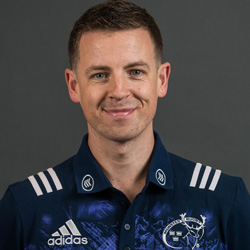 Keith, originally from Cork City, joined the Munster Rugby medical team during the 2014 season working as team physiotherapist. He divides his time between the Limerick and Cork centres providing physiotherapy treatment and rehabilitation to the first team squad.

Since graduating in 2007 with a BSc (Hons) in Physiotherapy from the University of Huddersfield, Keith has worked in a variety of roles in the private and sporting sectors, most recently working with Leeds Rhinos during their successful 2014 season.

Away from the game Keith is currently studying towards a Masters in Strength & Conditioning from Edith Cowan University, Australia, which is due for completion in late 2015.